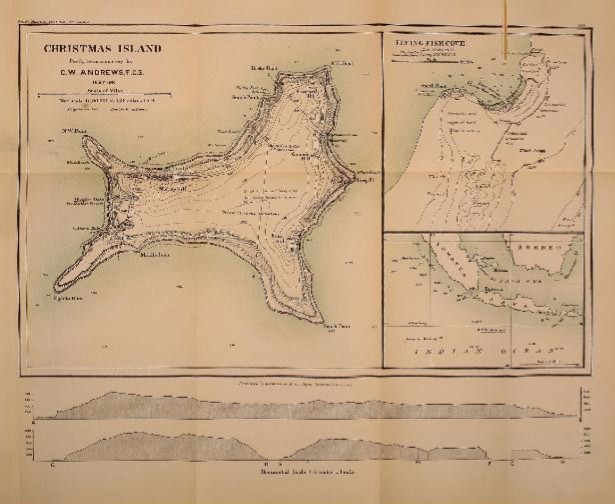 Tropical islands are certainly not what those of us in the U.K. readily associate with Christmas, but there are a handful of ‘Christmas Islands’ scattered across the oceans. Perhaps the best known of these is that depicted in this map, based on a survey by British palaeontologist Charles Williams Andrews in the late-nineteenth century. It lies in the Indian Ocean, approximately 1,600 miles northwest of Australia, of which it has been a territory since 1958. This Christmas Island got its name in 1643, about 250 years before Andrews conducted his survey, when the East India Company vessel the Royal Mary under Captain William Mynors sailed past on Christmas Day. It was not until 1666, however, that the island appeared on any maps, and it was 1688 when two sailors travelling under another Englishman, William Dampier, became the first Europeans to set foot on it. The island has long fascinated naturalists due to its diversity of fauna and flora, and it was one of the island’s natural resources, phosphate, which prompted the British to annex it in 1888, and subsequently encouraged the Japanese to invade in 1942, holding the island for over three years.