Forgotten in the Victory Celebrations: Thoughts on the 25th Anniversary of the Fall of the Wall 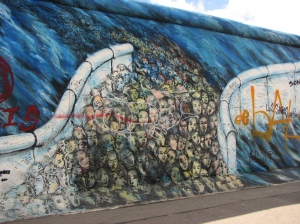 While the rest of Europe continues its sombre reflections on the outbreak of the First World War, Germany is taking time out for a more celebratory form of national remembrance. Over the next few weeks, Berlin will host a range of events, exhibitions and art installations commemorating the twenty-fifth anniversary of the fall of the Berlin Wall in November 1989, as well as the citizens’ demonstrations in the German Democratic Republic (GDR) that preceded it.

These celebrations are of interest in their own right, as the events they honour are widely seen as the beginning of the end of the Cold War. They are, however, also fascinating because of what they reveal about the interpretation of the GDR that is favoured and being promoted by the German government. This is the result of a politicized and often ‘bitterly contested’ conversation that has been taking place in German society since reunification in 1990.[1] The narrative that has gained most traction is that of an unquestionably oppressive and immoral communist state, which retained power through terror. October and November 1989 should therefore be seen an inspiring act of resistance by the East German populace – one which led directly to the restoration of a united Germany, and which fed into the larger democratic groundswell that ousted communism throughout the Eastern bloc. 1989 was, in short, of supreme national and international importance.

The German government has been keen to use the anniversary to emphasize this particular interpretation of 1989 and its continued relevance worldwide. The centrepiece of the commemorations is a 15 km-long ‘Lichtgrenze’ (‘border of lights’), which is to trace the former path of the Wall through the city. Each of the 8000 illuminated balloons comprising the Lichtgrenze is to be given a sponsor (‘Ballonpate’) from among the general public, who are expressly asked to share their views on the significance of 1989 for the world, as well as their own personal stories.[2] A glance through the sponsorship messages finds multiple posts displayed equating the 1989 events with present-day pro-democracy movements in Kiev and Hong Kong.[3] These sentiments were echoed in the speech given by President Gauck in Leipzig on 9 October, in which he drew a similar parallel – the implication being that the East German case could serve as an example to the rest of the world of a successful peaceful revolution. This focus on 1989’s international (and, just as importantly, moral) significance situates the commemorations within a specifically totalitarian understanding of GDR history.[4]

This approach, born of the initial jubilation of 1989 and the western triumphalism that followed reunification, has raised objections from both historians and members of the public, many of them former citizens of the GDR, who argue that their experiences there did not conform to the simplistic pattern it presents. Indeed, most former East Germans find it impossible to articulate their lives and experiences within any dominant public narrative. Their accounts, more ambiguous than the prevailing interpretations can encompass, are usually subsumed by the controversies surrounding them – a situation that leaves them prone to feeling alienated or even ‘robbed of their pasts’ by their western neighbours.[5] Between them, in essence, these dominant narratives have virtually monopolized the GDR’s popular and academic image – and in so doing have obscured a far more diverse field of equally valid, yet more complex, life stories.

It could, of course, be argued that this is a rather churlish objection to these twenty-fifth anniversary commemorations. The Lichtgrenze and its associated events are supposed to be a means of recognizing the oppressiveness of the East German state and celebrating the civic courage and democratic will of those who marched against it. There is more than a little truth to the version of history that emphasizes these aspects, and which acknowledges 1989 as the pivotal development it undoubtedly was.

When that history fails to incorporate the experiences of such a large proportion of the former East German population, however, it is worth asking: how long will the public and the elites in Germany consider it necessary to subordinate GDR history to politics? And how healthy, or just, can that be in the longer term? From this historian’s point of view, it would be fairer, not to mention more interesting, for the much wider variety of perspectives and memories, those less easily pigeonholed, to find a place in popular understandings of the GDR. With a full quarter of a century now separating Germany from its divided past, this would be a good time to begin to foster a more inclusive narrative.

It is 25 years since the #FalloftheWall and now Germany betrays #Ukraine, buys despot Putin's lies, for gas and some $business. #Deutschland