Selma through a woman’s eyes 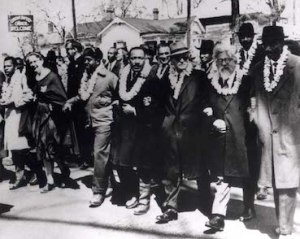 The film Selma opened on 9 January 2015 to a barrage of criticism about its historical accuracy. Though unable to use any of Dr. Martin Luther King Jr.’s words due to copyright issues, the movie attempted to recreate the tense scene in Selma, Alabama on the eve of the passing of the 1965 Voter’s Right Act.[1]  Providing fodder for cinema critics were reenactments of several important touchstones of the American Civil Rights Movement: Bloody Sunday, the struggle between the Student Non-Violent Coordinating Commission (SNCC) and Southern Christian Leadership Council (SCLC), as well as Martin Luther King’s relationship with Lyndon Johnson.  Many have focused on quibbling with the movie’s depiction of President Johnson as unsympathetic to King’s struggle; The Washington Post went so far as to say that “the movie should be ruled out…during the ensuing awards season”[2] for this reason.

While the politics of Civil Rights and Johnson’s role were both more complex than the stark contrast suggested in the film, another issue has not been addressed in this movie.  A key question comes to mind while watching the historical events unfold.  Where were the women? The film did present the tense relationship between Coretta Scott King and her famous husband, but in many ways shunted aside the crucial role female activists played in the Movement.

Dianne Nash, a female activist only briefly mentioned in the film, actually played a huge role in the proceedings in Selma. Along with James Bevel, Nash first proposed the idea of the ‘Alabama Project’ at a board meeting for the SCLC in 1963 and was largely responsible for the initial idea of a march on Montgomery.[3] Nash also acted as negotiator between the SCLC and SNCC during the campaign, as she had helped found both organizations. These two Civil Rights groups, focused on church-based communities and students respectively, had a contentious relationship and Nash, as a dual member, was in a unique position to smooth the strains between the two parties. Additionally, Nash organized the logistics of the Selma protest for voting rights and coordinated the movements of the protesters. During Bloody Sunday, it was Nash who summoned medics and saved the lives of many who were being brutalized on the Edmund Pettus Bridge. For all these arduous efforts, Martin Luther King Jr. himself awarded her the SCLC Freedom Medal following the passage of the Voting Rights Act of 1965.[4]

Dianne Nash’s marginalization in Selma is symptomatic of the sidelining of women more generally in both historical memory and media representation of the Civil Rights Movement.  Strong female leaders such as Ella Baker, who became the executive director of the SCLC in 1957, Prathia Hall, whose trade mark phrase of ‘I have a dream’ may have inspired Dr. Martin Luther King Jr., Dorothea Height, who helped organize the March on Washington, and Fannie Lou Hamer, who led Mississippi’s Freedom Democratic Party were and are shunned while media attention and historical memory focused heavily on Martin Luther King Jr and his more violent counterpart Malcom X. As March is women’s history month, we should reflect not only upon the men who promulgated this remarkable movement, but the women as well.

Tags: 20th century history, film review, gender history, history in the media, Media, protest, Public History, racism
From: Bookshelf, Reviews, Uncategorized
← The DPL of A: The New Knowledge Commonwealth
To ask or not to ask: that is the question →
One Comment Post a comment