To ask or not to ask: that is the question 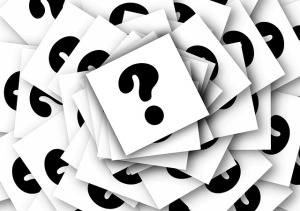 Palms sweating, mouth dry, heart pounding in my chest, my thoughts racing. I realise that I’m going to do it. Tentatively I gather my courage, swallow down the fear and start to raise my hand. Hand up, there’s no going back; I’m spotted and heads turn my way. Eyes on me, I open my mouth. Barely formulated sentences tumble out. I wait. Then clearly I have made enough sense that the watching eyes turn forward again. I have just asked my first question at a history conference.*

Only two other experiences have made me feel the same anxiety. The first, aged six, before I went in to play for my very first piano performance exam. The second, aged thirteen, waiting in the wings before curtain up of Twelfth Night (Act One, Scene Two) to say my first line “What country, friends, is this?”.

Putting yourself on the line for anything can be a terrifying experience. But what is it about asking a question in an academic environment that causes such feelings of fear, anxiety and stage-fright? Is there such a thing as the ‘perfect’ question? And, if so, how do you ask it (PhD comics have produced a helpful flowchart for question-asking – just amend ‘seminar’ to ‘history conference’)?

In my experience thus far as a postgraduate student, ‘bad’ questions at conferences usually fit into one of the following categories:

As a starting point for asking a question, I usually begin simply by asking myself “Am I about to become any of the above stereotypes?” If the answer is no, I continue by using the following few pointers (any other suggestions to add to my list would be much-welcomed):

Since I asked that very first question at a conference, what have I learnt? Firstly, that although it gets easier

to ask questions, the fear won’t subside entirely (or at least it hasn’t done for me thus far). But I’m starting to see that as a good thing. With the stage-fright also comes the clarity of knowing the reason why it scares me is that it matters a lot to me. This can be self-affirming instead of simply scary. Secondly, I think we should be more honest about fears which we encounter throughout the academic system such as these. At one point I genuinely believed I might be the only person to feel this way about asking an academic question; a ridiculous notion, but certainly one which wasn’t helped by being around a large number of seemingly-confident question-askers. It was only when I tentatively started to voice how I was feeling that I realised my fear was by no means unique. Being open about new academic experiences and knowing that others have been through the same thing too, even that they feel the same fears, can be both reassuring and supportive. It may help you with your own stage-fright to know that you are not alone.

*Someone has since asked me what this question was. In all honesty I remember the fear well enough, but the question itself has vanished from my memory!

Many blog posts have been written on asking academic question, or on asking questions more generally. Here’s a few of the ones I have found most helpful.