A Story about Exploding Bowels: The Bible, Hagiography, Monastic Foundation Documents and the Use of Historical Exemplars

Fraser is a PhD candidate in the Faculty of History. His thesis is entitled ‘The development of territorial principalities between the Loire and the Scheldt, 893-99′.

When I originally wrote these words, on the 19th November, it was (so Wikipedia informed me) World Toilet Day. Yet the question of human faeces is not only a modern concern. It was also a surprisingly highly charged issue in the Middle Ages. Take, for instance, the late-ninth/early-tenth century First Life of St. Gangulf. Gangulf was a pious layman who discovered his wife having an affair with a cleric. Subsequently, he left his wife, inciting within her a ferocious desire for revenge. She and the cleric conspired to kill him, and did so. But in doing so, they incurred the wrath of God. After doing the deed, the cleric feels the call of nature:

“But when he got onto the toilet, like Judas the traitor, who killed the human Christ, and Arius the heretic, who sought to divide the indivisible Trinity, his bowels exploded. His arse was just as empty as his head! And thus the unhappy man, denied the time to repent, descended to Hell in the toilet.” 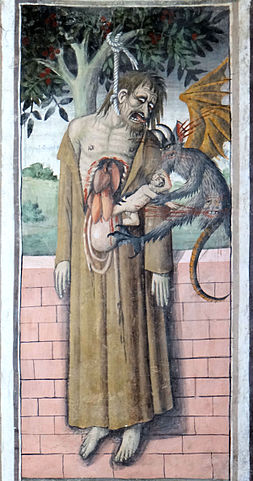 Judas hanging with his bowels hanging out

The motif of exploding bowels has a long history. Probably the most significant example is mentioned in the passage above. Acts 1:18 describes the death of Judas as follows: “Now this man purchased a field with the reward of iniquity; and falling headlong, he burst asunder in the midst, and all his bowels gushed out.” This itself, however, was a trope among Jewish communities around the time of Jesus: at around the time the Book of Acts was written, a Jewish author, Josephus, described Herod the Great’s death in a similarly gruesome fashion but at substantially more length (Antiquities 17.6.5).

The author of the Life was not the only tenth-century author who drew upon this imagery to warn of the wrath of God. The foundation charter of the important French abbey of Cluny threatens those who might disregard its provisions with the fate of the wicked king Antiochus, who also died of excruciating bowl pain (2 Maccabees 9:5).

Why were all these authors, writing texts to be used in solemn, even meditative, contexts using this particular motif? The disgusting deaths suffered by these figures would provoke a (no pun intended) visceral reaction in the audience, making the threat in the Cluny charter even more explicit.

But what about the Life of Gangulf? The translation above is very close to the original Latin, and doesn’t deviate too far from what seems to be its original intent either: the image of a wicked priest sliding down the cistern to Hell is supposed to be funny. The rest of the Life is similarly eccentric (Gangulf’s adulterous wife, for instance, is divinely punished with terrible flatulence). It has been suggested that the text is a pagan legend, or ironic. A simpler explanation, however, may be that the laughter is vindictive: God and Gangulf have punished the wicked through a suitably disgusting means, and we, the audience, are supposed to laugh contemptuously at this bad priest suffering the fate of some of history’s greatest monsters, recognising his evil deeds and the appropriateness of his fate.

By the standards of other contemporary saints’ lives, this is admittedly slightly left-of-field. Nonetheless, not every author needs to bend to our ideas of what a medieval hagiographer should write like. Besides, there may be method in his madness: the image of the adulterous priest and his exploding bowels may be disgusting, but in its own horrible way, it – and consequently the power of St. Gangulf – is unforgettable.