by Alexander Wakelam on February 2, 2016 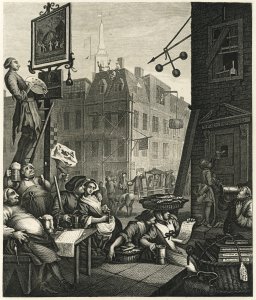 With the passing of the first month of the year many people across the country will be able to return to their vendor of choice and dispel their sobriety as Dry January ends. As a modern practice Dry January has its detractors but most agree that it’s a sensible idea to take a little break from drinking now and then. However, historically it seems a bizarre departure from this country’s cultural norm. The first official UK Dry January only dates back to 2013 and seems to remain a peculiarly British phenomenon with the only other similar national event being Finland’s 1942 Sober January launched as part of the war effort against Russia.

Alcohol has always been a prominent part of the English diet. For many centuries, its consumption wasn’t necessarily optional; particularly in urban areas cow’s milk was thought unsafe and even when water began to be piped into towns, it was foul tasting after travelling for up to thirty miles through lead or elm piping. Most people, including children, therefore drank “small beer” (usually 1 or 2% alcohol) throughout the day starting at breakfast, drinking “strong beer” in the evening or, in the case of labourers in the field, from lunchtime despite its 10% or greater strength. In 1652 the first coffee shop opened in London, providing the English with a safe, enjoyable, non-alcoholic drink that along with the later addition of tea spread throughout society. However, alcohol continued to be habitually consumed by most and excessive drinking continued. While Hogarth’s famous Gin Lane derided consumption of spirits, its reverse Beer Street depicts a productive, happy and civilised scene in which almost every figure is drinking beer while they go about their work. Some remained deeply suspicious of coffee; in the 1663 pamphlet The Maidens Complaint two characters having derided the evil effects of caffeine, bid ‘Adieu till tomorrow’ and that ‘instead of Coffee, wee’l have a cup of wholsom Ale and a tost’ implying the loyal and true English nature of alcohol as opposed to foreign and seditious coffee. Despite the rise of safe alternative beverages, alcohol remained a key element of socialization and everyday consumption.

Despite alcohol’s pervasive nature, Britons in this period did often feel guilty about their excessive behaviour. The mid-seventeenth-century clergyman Giles Moore recorded a moment of drunkenness in Latin rather than the English of the rest of the diary to keep it secret from even the most prying of eyes:

‘This evening, … when I had began prayers with my family, I was so overpowered with the effects of some perry [pear cider] which I had taken, not knowing how strong that liquor was, that I was obliged to break off abruptly.’

Similarly Thomas Marchant records a night of heavy drinking in the early eighteenth century in his dairy with:

Dr Johnson, at times happy to indulge a little, also betrays a sense of a troubled personal relationship with alcohol. Boswell in his Life of Samuel Johnson quotes him as remarking that ‘Melancholy, indeed, should be diverted by every means but drinking’. A significant statement surely from a man who struggled with both, once also saying that he ‘scorned to drink [wine] when in company. I have drunk many a bottle by myself.’ Boswell also quotes him as saying:

‘Sir, I have no objection to a man’s drinking wine, if he can do it in moderation. I found myself apt to go to excess in it, and therefore, after having been for some time without it, on account of illness, I thought it better not to return to it. Every man is to judge for himself, according to the effects which he experiences.’

Johnson though wasn’t beyond boasting of his drinking days even if he, as an elder man understood better the need for moderation: ‘I did not leave off wine because I could not bear it; I have drunk three bottles of port without being the worse for it. University College has witnessed this.’

As much of an anomaly as Dry January is in the historical narrative of English alcohol consumption, it is here to stay (probably for the better). The guilt that usually prompts period of sobriety though is clearly not new, however, neither perhaps, is the short-lived nature of much of that sobriety which our ancestors experienced is also not gone. Samuel Pepys’s description in April 1661 of ‘Waked in the morning with my head in a sad taking through the last night’s drink, which I am very sorry for’ is eerily familiar for those swearing off drink, but so too is his short term memory when he spent the very next day boozing from breakfast through dinner. If your personal sobriety fails to live into February then, spare a thought for Pepys and his ilk. Your struggle is less than new.

Beat Kümin and B. Ann Tlusty. The World of the Tavern – Public Houses in Early Modern Europe. Aldershot: Ashgate, 2002.

Anon. The Ale-wives complaint against the coffee-houses. London: 1675.