Royal Power takes Flight: A Reconsideration of the Staircase in the Early Modern Palace 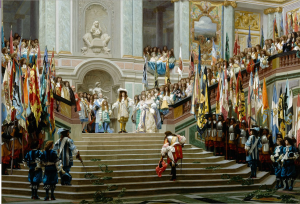 In a letter written in 1663, Jean-Baptiste Colbert wrote to King Louis XIV of France that ‘in lieu of dazzling actions in war, nothing indicates better the greatness and spirit of princes than buildings’.[1] This sentiment illustrates the importance of palace architecture to the image and character of the prince in the early modern period. In the growing field of architectural history, the political and cultural functions of such grand spaces have been the focus of increasing interest in the last few decades. Scholarship has focused on the sixteenth- and seventeenth-century trend for palace building and adaptation by European princes aiming to affirm their royal status.

Palaces in this period were intended to impress foreign dignitaries and nobles, and thus the spatial layout of such buildings was politically charged. Considering the architectural structure of a palace is not enough, as the social interactions performed within these spaces were of primary importance.[2] Rooms, entrances, and staircases were all complimented by (and took place in) the context of courtly ritual and ceremony. A range of historians has considered the role of spatial design, the commissioning of decorative artwork, and the ritualized use of various architectural features within the early modern court. A widely-overlooked aspect of courtly ritual revolves around the use of staircases as a common and integral method of constructing the image of princely authority.

Versailles and the Vatican, two of the most eminent early modern palaces, both made use of this architectural feature, indicating that European princes had a common need to reinforce their status, be it temporal or spiritual. Louis XIV’s Versailles contained the grand Escalier des Ambassadeurs, completed in 1680. This ceremonial staircase split into two flights of stairs leading into the State Apartment enfilade, and was built to impress or intimidate visiting dignitaries. Here, a richly-decorated, low vestibule led into the huge open space of the marble and gilt staircase, which was topped by a skylight that illuminated frescoes by le Brun.

This space had a direct link to the ritual of the palace. When Russian ambassadors visited Louis XIV at Versailles in 1685 they were met at the bottom of the staircase by the Captain of the Guard and led in to the Salon of Apollo with uniformed Swiss guards lining the route. There they met Louis XIV, who sat on a silver throne raised upon a platform, again indicating his royal and quasi-divine status. The staircase could also show the status of the visitor, depending on which stair the king’s person received them. At Versailles both the decoration and construction of spaces added to the glory of the king.

The Vatican Palace’s Scala Regia (Grand Staircase) was built between 1663 and 1666 to designs by Bernini under the influence of pope Alexander VII. This space was intended to emphasize the papal legacy through architecture and decoration. Beginning with the fortified Portone di Bronzo and leading through an expansive interior corridor, the slow ascent of the marble stairs allowed the visitor to look up to a window on the middle landing. The staircase was imposing as the primary entrance into the private palace of the papacy. The short step heights forced the visitor to slow down and take in the glory of the grand expanse, which was framed by columns. On the first landing a statue of Constantine gazing up towards his vision of Christ further emphasized the divine nature of the space and separated it from its worldly surroundings.

The Scala Regia led up to the greatest reception room of the palace, the highly decorated Sala Regia, or papal audience hall. The room was built in the first half of the sixteenth century and decorated over time by successive popes. Paintings by Vasari depicted Catholic victories over Huguenots and the Ottoman Empire, celebrating Christian victories. The Scala Regia was only used for the most formal of receptions and was a space clearly designed to illustrate the majesty of the papacy.

Looking at the Escalier des Ambassadeurs and the Scala Regia reveals how ideas of status, political or religious power, and the majesty of the figure of the prince were reflected within the physical design of palaces. Architecture, and especially the staircase, acted as both a backdrop and a strongly influential framework for the rituals and events of courtly life in early modern Europe.

Ronald G. Asch and Adolf M. Birke (eds.), Princes, Patronage, and the Nobility: The Court at the Beginning of the Modern Age (Oxford, 1991)