Sweet harmony or rough music? Singing in the seventeenth century 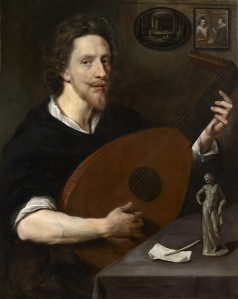 If you’ve ever been in a roaring rugby crowd, a church full of carol singers, or even just broken into song in the shower, you’ve probably noticed that singing can have a powerful effect. The physical, psychological, and social benefits of singing are now widely recognised, although the underlying reasons behind these are less well understood. But what if you could harness the power of singing, and use it for ill? In seventeenth-century England, it was generally agreed that singing could have a significant impact on the emotions. What was less clear was whether this was always a good thing.

England had a vibrant musical culture in the early modern period. Musical knowledge and awareness was an important part of formal education, but it was also spread through exposure to live music on the streets, in alehouses, and at social occasions. Historian of early modern music Christopher Marsh has argued that this was ‘an age in which people felt things through their ears somewhat more acutely than we do nowadays’. [1] Given this, it is unsurprising that people attributed to music in general, and singing especially, a particular power to shape behaviour and belief.

For many, singing had a positive effect. In his The Complete Gentleman, a courtesy guide published in 1622, Henry Peacham extolled the benefits of singing, stating that it ‘openeth the breast and pipes; it is an enemy to melancholy and dejection of the mind’, and that singing ‘is a most ready helpe for a bad pronunciation, and distinct speaking…yea, I my selfe have knowne many Children to have bin holpen of their stammering in speech, onely by it’. The ability to sing in harmony was, for Peacham ‘worthy the knowledge and exercise of the greatest Prince’. [2] This was partly because social and musical harmony were seen as tightly intertwined. Local communities often policed moral behaviour with the use of discordant noise – the banging of pots and pans, the beating of drums, and the tuneless playing of pipes, to create “rough music” to humiliate those in the community who had committed moral crimes such as adultery. [3] The converse of this was that well-tuned harmony was representative of, and encouraged, social cohesion. [4]

Yet the power of singing could also prove divisive, particularly in a religious context. Throughout the seventeenth century, some religious and moral reformers expressed concern that the emotional power of music might cause immorality by distracting worshippers from the praises of God towards more sensual matters. Tension over this was reflected in the 1690s in printed debates about congregational singing. In 1691, the Baptist minister Benjamin Keach published a collection of hymns for use during Sunday worship, declaring that ‘We are exhorted to sing Psalms, Hymns, and Spiritual Songs’. Keach saw singing as a gift of the Holy Spirit, which ‘hath mixed the power of his Doctrine with sweet Singing, that whilst the Soul was melted with the sweetness of the Verse, the Divine Word might the better be grafted with profit’. Acknowledging that some songs and ballads could corrupt youth, he declared it all the more important to use the gift of song for the worship of God. [5]

Others, however, were not so clear that the emotional power of singing could be harnessed for good. In the same year Isaac Marlow published a response to Keach, suggesting the immense dangers that singing could present to the soul. One of his concerns was that the inclusive nature of congregational singing could subvert Godly order by giving spiritual authority to women, who he believed should (literally) not have a voice in spiritual matters. ‘For the Apostle saith indefinitely, that Women must not speak nor teach in the Church,’ he wrote, ‘and therefore we cannot in reason make an exception for their speaking or teaching, in Singing’. [6] Singing was not just damaging to authority, however. Marlow was concerned that it would mislead the soul. Distinguishing between ‘heart-melody’ and ‘outward melodious forms’, he believed that humans were incapable of singing with a truly spiritual heart due to the corrupt nature of mankind. The result was that ‘for any to say, that they have the inward Melody in the use of outward melodious Forms: we may rather conclude, that it is carnal and sensual, instead of spiritual’.[7] For Marlow singing together during worship awakened sensual desires and misguided the heart away from God.

Keach and Marlow agreed that singing could have a powerful emotional and spiritual effect. Where they differed was whether this could be controlled for good. Such disagreements have not been confined to early modern England. Plato made a distinction between “good” and “bad” music, with the latter having the power to corrupt individuals away from a good life. Fast forward over 2000 years, and in the 1990s Taliban rule in Afghanistan restricted music to a narrow selection of songs sung by unaccompanied male voice. In Singapore today, anyone caught singing obscene songs in public could theoretically face imprisonment for up to three months. Singing can express joy and sorrow, elation and despair, companionship and solitude in ways inexpressible through other means. Singing is an inescapable part of the human condition. It will, therefore, always be subject to debate.

Tags: early modern, music and history, religion, singing, social history
From: Carys Brown, Doing history in public, Research, Uncategorized
← Australia Day and the Struggle to Control a Nation’s History
The trials and tribulations of the cross-border historian →
No comments yet