The Wandering Historian: Reflections on a Year of Research Abroad 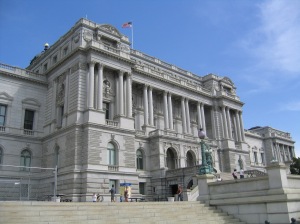 In the second of our posts on doing research abroad, Tom Smith  (@TomEtesonSmith) traverses the United States.

Working on American history from a British university as I do, it was inevitable that at some point during my PhD research I was going to have to spend some time abroad. Courtesy of two Arts and Humanities Research Council-funded fellowships, first at the Huntington Library in California, and secondly at the Library of Congress in Washington, DC, ‘some time’ rapidly became more-or-less an entire year. While I was somewhat daunted by the prospect of abandoning family, friends, and familiar settings to enter the political inferno that is the contemporary United States, this was too good an opportunity to pass up.

As I approach the halfway point of my time away, having visited archives across five different U.S. states so far, I’ve been led to reflect on how the experience of moving abroad has shaped my PhD and my approach to historical research more generally. It goes without saying that archival research has moved my project forward, as any good period of archival research should. Beyond this, however, there’s a process of absorption which goes on outside the archive and can have a dramatic impact on the way the historian thinks about their work. While the mechanics of poring over documents in a library’s reading room are much the same as they are at home, stepping out to visit a museum or public history event, to speak to a local academic, or simply to soak in how it feels to be in any given place, can shed new light in more unexpected ways.

I experienced this in particular in Hawai‘i, one of the sites in which, for my PhD thesis, I’m exploring American Protestant mission and empire in the late-nineteenth and early-twentieth centuries. Without going into the details of my research, several frustrating days in the archives were overturned by just a couple of conversations with local historians, who gently led me to the conclusion that I might be barking up the wrong tree. These were people not only well-versed in historical contexts into which thus far I had only dipped my toes, but also embedded in the local community, giving them an intuitive sense of issues important to both historians in the field and to the wider public. Their unique insights certainly helped me see where my research wasn’t working, and to begin to understand how it could work. Moreover, one weekend, I headed out to a public history event, in which actors staged the events leading up to the overthrow of the Hawaiian monarchy by a mostly American clique in 1893. Here, I was able to see first-hand the ongoing relevance of historical narratives from the period I study to Hawaiians in the present day.

Such insights into the value of history in the places I study serve, of course, to give a heightened sense of the importance of the historian’s work, and make me more determined than ever to try and ensure that I am saying something meaningful through my PhD. They also, conversely, make me more aware of my limitations, leading me to reflect upon and acknowledge the specific and useful perspective which an outsider might be able to bring, and prompting me to ensure that I am not making claims to speak for anyone. If this wasn’t enough, I’ve also found that the logistical challenges of travelling thousands of miles from home, navigating such an enormous country (and, in the case of the Library of Congress in particular, its enormous libraries), and generally being out of my comfort zone sharpen my focus, force me to manage my time better, and help me start learning to deal with the multitude of problems and tasks, both practical and intellectual, which might face the professional historian at any given time.

In sum, I’ve found the experience of researching abroad over an extended period to be often frustrating and difficult but, when things come together, it can be hugely rewarding.