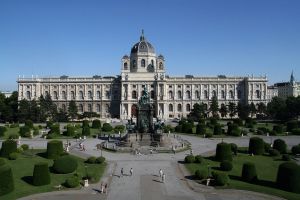 Approaching the past as an historian is comparable to trying to solve a puzzle whose pieces are constantly changing shape. An element which momentarily appears to fit snugly in place comes suddenly into focus as glaringly wrong when new evidence comes to light. Whilst frustrating at times, these moments of clarity during the historical research process can also be wildly exciting and lead to new understandings of the past. Equally thrilling is the experience of applying different approaches to one’s research that results in two apparently incongruous pieces of the historical puzzle joining together perfectly. The process of piecing together the complex puzzle of historical problems involves searching for the hidden tensions and unspoken meanings inherent in all human activity.

A fitting historical conundrum to which this approach can be applied is the architectural design of Vienna’s Kunsthistorisches (Art History) Museum, built between 1871-1891 under the patronage of the Habsburg Emperor Francis Joseph I. The museum’s primary architect, Gottfried Semper, was an odd choice for a building intended to house the imperial art collections of the Habsburgs. A committed republican, Semper had taken part in the 1848-49 revolutions in his native Dresden, and had fought for constitutional rights against Prussian forces in that city. He had subsequently been exiled, and was forced to live in London for several years.

Why was this revolutionary figure chosen to design a building intended to proclaim the glory and power of the Habsburgs in the capital city of a multinational empire? Additionally, in a period of strong liberal authority in Vienna, why did Semper not come to be involved in the concurrent liberal construction projects for a new parliament building or theatre complex (especially as he had gained his initial fame for an earlier theatre design in Dresden)? The involvement of the radical Semper is a puzzle piece which does not at first appear to fit into the picture of imperial power intended by the Habsburgs.

In order to reconcile this apparent discrepancy, it is necessary to explore the process through which the museum was designed. In 1865, the City Expansion Commission [Stadterweiterungskommission] announced a competition for the design of a new art museum in Vienna. The Commission was largely liberal in its make up, but the competition lapsed in July 1867 after the jury failed to nominate a final design. The jury lost out in the battle for cultural dominance in Vienna when it was forced to disqualify its favored liberal architects Theophil Hansen and Heinrich von Ferstel for failing to produce designs for an entire museum complex. A new competition was announced by Francis Joseph himself in August 1867.

After receiving word of the competition from a jury member, Semper wrote to the Emperor with his own ideas for the project and was invited to Vienna in April 1869 to discuss them in person. Semper’s plans to connect the new museum complex to the Hofburg (palace) via triumphal arches across a grand boulevard appealed to an Emperor who increasingly sought to promote imperial power through culture after humiliating military defeats by the Italians and the Prussians in 1859 and 1866 respectively. Semper’s understandings of the purpose of monumental architecture are key to an analysis of how visions of Austria’s position were expressed through this structure.

The apparent discord between Semper’s political radicalism and the emperor’s conservatism can be resolved through a consideration of Semper’s architectural theories. Through further analysis, it is clear that these lend themselves strongly to imperial structures due to his reverence for both Greek approaches to art and Roman styles of architecture. For Semper, who wrote that ‘politics and art have always gone hand in hand’, architecture was a reflection of contemporary values and societal organisation.[1] His admiration of the ‘Roman’ style is illustrated in his original design for the complex of buildings linking the museum with new wings of the Hofburg, known as the Kaiserforum. Rather than a more ‘democratic’ Greek-style agora, the Semperian ‘forum’ here had symbolic imperial undertones in its intended spatial link to the Hofburg.[2] It is evident that this element of Semper’s thinking was easily applicable to the imperial aims of integrating and stabilising a multinational empire through the appropriation of culture.

This consideration of the hidden connections between what at first appear to be radically different worldviews on the part of emperor and architect reveals the necessity of looking into the hidden meanings of historical events. Pieces of the historical puzzle should not be too easily accepted or rejected, but should be analysed on their own terms before being placed into the broader picture.