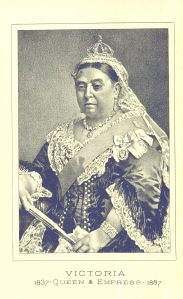 Queen Victoria’s Golden and Diamond Jubilees in 1887 and 1897 prompted an outpouring of national celebration. The queen received thousands of jubilee addresses from local authorities, philanthropic organisations and societies across the country. These large, colourfully decorated documents were full of patriotic language praising Victoria’s long reign. Trawling through these addresses in the National Archives was an experience in itself. But I was thrilled to discover among the adult-authored documents a Golden Jubilee address from ‘The Children of St. Columb School, Forest Hill.’[1]

Mirroring the elaborate decoration and pristine text conventional of jubilee addresses, the child author borders the carefully hand-written page with illustrations including a drawing of a crown. Alongside typical statements of patriotic loyalty, the address contains more childlike comments. The children present themselves as ‘loving and dutiful little subjects’. The address is unique for the personal way the children write to the monarch, noting ‘it must be very anxious work being a queen’. It seems, for children, the monarch was to be both revered as a public figure and admired on a more personal level. This rare example of children’s writing in the official archives is an invaluable source for investigating late Victorian children’s attitudes towards the monarchy, citizenship and nation.

From: Uncategorized
← 6. Limericks, love, and loss in the archives
8. Hidden histories →
No comments yet