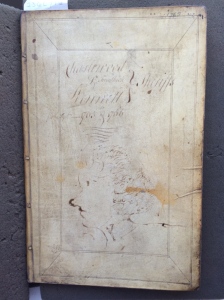 As a quantitative economic historian, a significant amount of my research is impersonal. Studying the functioning of eighteenth-century debtors’ prisons and their effectiveness as a mechanism of contract enforcement rarely brings one into contact with material that connects you to the thoughts, feelings, and lived experience of an individual human being. My principal source material, prison commitment registers, as official documents, shun personal details beyond names and the size of debts. However, the register of Cheapside’s Woodstreet Compter for 1765-66 provides a rare variation. Bound unceremoniously in cheap undyed leather the only thing that makes it stand out is an ink sketch of an unknown individual on the cover. The image fascinates me, both in terms of who drew it and who it might be – questions that will never be answered. It strikes me likely that it was the construction of the anonymous clerk who managed commitments – perhaps a man who would rather have been more than a prison clerk. While the artist is no Gainsborough, there is some genuine talent in the delicate lines sketched idly on a quiet day in the compter office. In the archive, I photographed the register without even noticing the sketch as it was just one of 40 volumes I needed to study that day – now I try to look at it once a week to remind me that, both the officials and the prisoners, were human beings with value beyond just the data points that they represent in my research.