What Not to Wear: The Importance of Women’s Fashion in the Eighteenth Century and Today 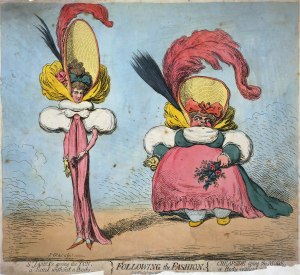 Women and fashion are often explicitly linked. One only has to consider the media coverage of the new Duchess of Sussex to uncover how frequently a woman’s identity is equated to, or even entirely subsumed by, the clothing she wears. In a recent Guardian article , the more conservative muted wardrobe she has opted for after her marriage was equated to the muting down of her opinionated, questioning personality.

This rhetoric is not new and has not been limited to public figures. In the letters of eighteenth-century women for example, descriptions of new female acquaintances are almost always accompanied by long reports of their dress. An East Anglian gentlewoman, Barbara Ward described a relative’s fiancé as ‘genteel and agreeable’ before immediately documenting her dress ‘the best cloths she has apeard in last sonday at church was blue and gold rich silk and black laced hood’.[i]

Such descriptions give the impression that they reveal far more about the woman in question than her dress. This is because, frequently unable to distinguish herself professionally or through the land she owned, and legally subjugated to her husband, the eighteenth-century woman could use her sartorial choices to reflect her ideals and personality; using objects to create meaning in her life.[ii]

The use of clothing to reflect women’s values and identities has not diminished across the centuries. Throughout history, clothing has remained one of the most powerful tools of female protest. The suffragettes donned green and purple to advertise their allegiance to the cause and earlier this year, the women of Hollywood chose their clothing as the medium through which to protest their professional subjugation to men and to show solidarity with the “#metoo” movement.

In all of these cases, the link between femininity and clothing has been harnessed by women, becoming a powerful tool through which to protest or even merely consolidate their social standing. Meghan Markle, for example, was not universally accepted, particularly in the right wing media, when the news of her romance with Prince Harry first emerged and yet her carefully curated image, of which her fashion choices play a major part, seems to have won them over. The media however are a fickle friend and such use of clothing can expose women to huge risks. Anthropologists Alfred Gell and Sophie Woodward argue that when clothing is used as a reflection of the wearer’s character and ideals, it becomes imbued with their identity, leaving them exposed, as a critique of their clothing becomes a critique of themselves.[iii]

This was particularly problematic for the women of the eighteenth century because, as consumers, they faced unprecedented societal critique. Elizabeth Koweleski-Wallace suggests that women in fact became the sounding board for all of society’s paradoxical fears about conspicuous consumption more generally. Female consumers were depicted as blind adherents to every whim of fashion; powerless in the wake of the market. However, as women’s consumption power increased with the greater range of cheaply available goods, the female consumer simultaneously came to be viewed as a subversive potentially dangerous force.[iv] And yet women were still expected to stay up to date with new trends. The country wife who was ‘at least ten years behindhand in her fashions’ was a frequent target for mockery. [v]

Eighteenth-century women had to walk a tightrope between fashion and excess, but their modern-day counterparts scarcely have it easier. Contemporary gossip magazines are overflowing with stories deriding some celebrities for their outlandish, subversive fashion choices and others for being conservative, outdated and stuffy. The balance is, for some, almost impossible to find and yet when it is perfected, clothing can be the key to a woman’s success. In the eighteenth century, just as today, fashion and clothing can be an immensely powerful tool and yet using it also exposes women to huge risks. Never should clothing be dismissed as mere feminine frivolity; it has the power to solidify or destroy a woman’s social position in the eyes of her peers and if not the entire nation.