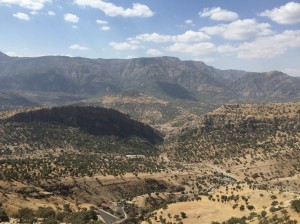 When I found out that I would be taking part in this summer’s season of Excavations at Shanidar Cave I was really excited as the cave is so important in our understanding of Near Eastern Prehistory and Neanderthal behaviour. I was also slightly nervous as this would be my first experience taking part in a full archaeological dig. The site is located in Northern Iraqi Kurdistan, around three hours north of Erbil. The cave itself sits within the valleys and the foothills of the Zagros mountains, specifically on Baradost mountain, after which one of the Upper Palaeolithic technological industries discovered at Shanidar was named.

Image shows a view of the entrance of the cave, taken from the path leading up to it.

The cave was initially excavated by Ralph and Rose Solecki in a series of excavation seasons in the 1950s during which the remains of nine Neanderthal individuals were discovered.[1] The Neanderthals found in Shanidar are significant due to the presence of an individual who lived for a long period with severe injuries, potentially showing a degree of care and compassion for the wounded or disabled among Neanderthal groups.[2] In addition to this, flower pollen was found around the head of an individual which was interpreted at the time as a “flower burial”, changing our ideas of Neanderthal behaviour and abilities.[3][4]

The recent series of excavations was carried out by a team of archaeologists from various universities in the UK, the Canterbury Archaeological Unit and representatives from the Kurdish Directorate of Antiquities. The highlight of this summer season was the discovery of further elements of one of the Neanderthal individuals including the skull. This discovery  was met with considerable excitement, not only from our own field team, but also the members of the Kurdish Directorate of Antiquities and the Kurdish Media.[5] A considerable amount of lithic artefacts, faunal materials and sediment samples have also been brought back to the UK for further scientific analysis. The main aim of the current excavations is to re-investigate the Neanderthal burials and to build a more complete picture of the environment and climate experienced by Neanderthals and modern humans throughout the sequence of the cave.[6] This will, in turn, have implications for our understanding of Neanderthal extinction and the movement of modern humans across the region.

Aside from the excavation itself, one of the most memorable aspects of the fieldwork was the landscape and wildlife around us. The cave is set in a wider archaeological site which has restricted grazing within the fences of the compounds. The cave is perfectly placed to look out over the mountains and valleys ahead and the landscape was really staggering, especially in the early morning as you could track the rising of the sun from the shadows cast across each mountain valley. The landscape was very dry during our visit as we were there at the hottest time of year. Water was scarce in the local area during our visit, with temperatures reaching 43 ˚C, so the spring at the back of the cave attracted a large number of animals to it. Herds of Ibex were frequently seen close to the cave mouth and in the valley around us and, although we did not encounter them face to face, in the early evenings we could hear the wolves and hyenas howling across the valley. Slightly less welcome visitors in the form of scorpions, camel spiders and centipedes were found closer to home around the dig house, with the latter even being found in the bedding of one of the team members!

Overall, I feel very privileged to have had my first experience of archaeological fieldwork at Shanidar. Despite my inexperience, all of the members of my team were really helpful and supportive, and I have come away with valuable technical advice on fieldwork and Shanidar as well as more general advice on how to survive a PhD!

Cover image: View of the valley taken from the slopes of the mountain above the mouth of the cave.

Tags: archaeology, Cave, fieldwork, Iraqi Kurdistan, Neanderthals
From: Doing history in public, Reflections, Research
← On Florentines and Fieldwork
Public History at the Cambridge Festival of Ideas →
No comments yet