The Wagah Border: a site of uncomfortable contradictions 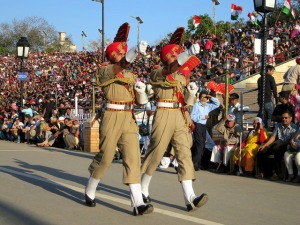 The Wagah (or Wagha) border is the Punjab border between India and Pakistan. It is approximately 29 km from the city of Lahore on the Pakistani side and 27 km from Amritsar on the Indian side. Whilst undertaking archival research in Lahore, I was told about the daily lowering of the flags ceremony or parade which takes place at the border. I attended the parade one weekend alongside hundreds of other spectators. These border ceremonies are popular tourist attractions on both sides and are well attended by eager residents and visitors, especially on weekends and national holidays. Other parades, such as the Beating Retreat ceremony on Independence Day, are also held at the border. For me, as an historian of South Asia and a British Pakistani without the patriotic zeal of my fellow spectators, the parade was a bizarre tableau of contradictions.

Audiences congregate more than an hour before the scheduled parade to get a decent view. Before the actual ceremony, nationalistic music is played on both sides in attempts to drown out the ‘other side’. The spectacle of nationalism and patriotism is complete with salutes, flag waving and dancing. You can see the ‘other side’, in my case the Indian side, also engaging in similar partisan celebrations. Then the parade began. Officers from both sides open the border (a large gate) and proceed to march in a carefully choreographed performance which involves shaking hands with the opposite side and a show of muscular strength through exaggerated arm gestures. The event ends with the respective Indian and Pakistani flags being lowered and raised in symmetrical fashion.

The tensions of the parade are stark: the border regularly becomes a site of celebration and antagonism, cooperation and competition, a display of strength and a comical show.  When taken as a snapshot, frozen and fixed in time, the scene becomes almost farcical. The parade serves as a touchpoint for the tumultuous histories and contemporary relations between the two countries. These are histories of neighbourliness and shared identities as well as deeply-rooted sectarian violence and memories of trauma, through the violence of the Partition of 1947.

The Punjab border has been a site of extreme violence and mass migration. During the colonial period, the Radcliffe Plan split the provinces of Punjab and Bengal (which became East Pakistan and Bangladesh in 1971 after a horrific war) as part of the partitioning of the Indian Subcontinent into Pakistan and India. As historian Ayesha Jalal argues, “Punjabis cutting across communitarian divisions were jealously guarding their claims to social spaces, embodying both the material and the spiritual aspects of their individual and collective identities”.[1]

The historical trajectories of both countries since 1947 and their contemporary relations also highlight the dissonance of the Punjab border ceremony. The displays of ‘cooperation’ at the Wagah border are at odds with expressions of extremism and authoritarian regimes in both countries. These include instances of Islamic-justified terrorism and intolerance in Pakistan and increasingly popular forms of extreme Hindu nationalism encapsulated by the BJP party (which inspires intolerance and violence towards the Muslim minority) in India. The parade stands in stark contrast to other border sites and ongoing territorial disputes, such as in the contested regions of Jammu and Kashmir which saw a surge in violent clashes and protests in the past year.

We shall see if relations between the countries will ever reach the playful and competitive camaraderie of the parade. Both Lahore and Amritsar are home to those who identify as ‘Punjabis’ – could these kinds of shared identities signal a hopeful reconciliation between the two countries or intensify territorial and sectarian conflicts in the future?

Tags: border, India, Lahore, Pakistan, parade
From: Doing history in public, History & current affairs, Mobeen Hussain, Reflections
← Public History at the Cambridge Festival of Ideas
How has protest in Europe evolved?: An Interview with Dr Hanno Balz. →
No comments yet