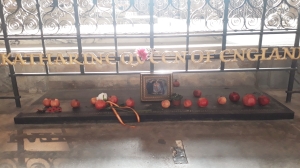 The pomegranate has had many religious, mythical, and political connotations. It was associated with Katharine of Aragon due to her position as a Spanish princess. Born in 1485, she was a child when her parents, King Ferdinand II and Queen Isabella, conquered Granada, which is the Spanish word for pomegranate. The fruit was officially acknowledged as her personal emblem when she married Henry VIII in 1509. A manuscript presented by Thomas More to honour their coronation featured a Tudor rose and a pomegranate under a crown.[1]

In 1535, following her divorce from Henry VIII, Katharine of Aragon was sent to Kimbolton Castle, in modern-day Cambridgeshire. She died shortly afterwards on 7 January 1536. In her final letter to the king, she called Henry her husband and signed the letter as ‘Katharine the Quene’. Despite this, Henry denied Katharine a state funeral at Westminster. Instead, on 25 January 1536, the local gentry were summoned to escort her body from Kimbolton Castle to be buried at Peterborough Abbey (now Peterborough Cathedral) on 29 January 1536. Nonetheless, Henry ordered his entire court to dress in mourning on the day of Katharine’s burial. Anne Boleyn refused and dressed herself and her household in yellow, possibly to signify her joy at the news of Katharine’s death.[2] Due to Katharine’s burial, Peterborough Abbey was spared from any destruction during the dissolution of the monasteries.[3] Though Katharine’s grave was not yet safe. In 1643, Katharine’s tomb was destroyed during the English Civil War. Finally, in 1893, because her body had remained in peace at Peterborough, the Daily Mail asked the ‘Katherines of England’ donate a penny towards a new grave. When visiting the cathedral today one will see that pomegranates, Katharine’s heraldic symbol, have been placed on her tomb in commemoration of the Tudor queen.