Who do I think I am? – My experience with AncestryDNA 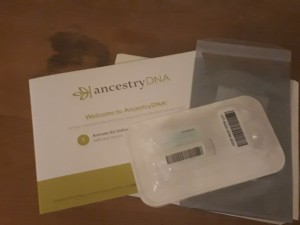 Thanks to programmes like Who Do You Think You Are? there has never been more interest in family history. Since the turn of the century, family historians have started to look beyond traditional records such as the census, and birth, death, and marriage indices to new scientific methods. DNA tests are now being used to shed light on ethnic or biogeographical origins and to identify genetic relatives.[1] In 2017, more people took an ancestry DNA test than in all  previous years combined. Moreover, it is estimated that by 2022, the genetic testing market will be worth approximately £261 million. The ease and reasonably low cost of heritage DNA tests has made this technology accessible to everyone. So, with that in mind, I decided to give it a go.

There are a plethora of companies offering home DNA ancestry testing kits. Since I use ancestry.co.uk to research my family tree, it made sense for me to use the AncestryDNA test. This test provides two things: firstly, an ‘ethnicity estimate’ – your DNA is tested against over 500 regions, and secondly, a list of genetic relatives. AncestryDNA is the world’s largest autosomal DNA database; they have tested over six million people. Your DNA is compared to each person and you receive a list of matches, each with a possible relationship category. The current cost of this test is £79.00 plus shipping. I ordered my test online and it arrived within a couple of days. The process was surprisingly straightforward – essentially you have to spit in a tube and post it back to their lab. Within eight weeks of posting, you receive your results by email.

I decided to read my results over a pint of EagleDNA, in the very pub where Francis Crick and James Watson announced that they [and Rosalind Franklin, although they neglected to mention her] had discovered the double-helical structure of DNA.[2] As I was born and brought up in Wales, but with no Welsh family, I have always been interested in the origins of my ancestors. Everyone in my family tree was from England or Scotland but as I opened my results I was not sure what I wanted to find, something unexpected, or verification of my genealogical research. I got the latter, with some unexpected small percentages:

The science of biogeographical DNA testing is still in its infancy. Russell James, Ancestry.com’s family history and DNA expert explained using Germany as an example: “As we test more people maybe our view of Germanic DNA slightly changes over time. Or we might be able to get more granular, perhaps we can say ‘this is what our view of northern Germany looks like, or what Munich looks like’. This is very much the beginning of a new technology.” [3]

Therefore, it is vital to be aware that your DNA results are not permanent. While it is unlikely that your largest areas will disappear, the smaller ones might. Furthermore, your results could become more localized. A few months after receiving my results, I was sent an ‘ethnicity update’:

The category that was ‘England, Wales & Northwestern Europe’ was localised to ‘Northern England & The Midlands’. A few of the lower scoring regions have entirely disappeared. Most interestingly, my ‘Scandinavia’ category has been increased and split into Sweden and Norway. While it is not unusual that someone with English or Scottish DNA would also have Scandinavian ancestry, it is not something that I had ever considered to be part of me.

In addition to the biogeographical data, AncestryDNA also matches you with genetic relatives that have taken the test. I have found four third cousins, over one hundred fourth to sixth cousins, and numerous distant (fifth to eight) cousins. I found a third cousin once-removed who had photographs of my great-grandmother and great-great-grandmother. Although my answer to the question Who Do You Think You Are? has not drastically changed, I am glad that I took the test. I now look forward to receiving more localised biogeographical information as the technology improves, and I hope to find new relatives as more people take the test.