Dreams of ‘something better’: Exploring childcare alternatives from the First Neighbourhood Co-operative Nursery to ‘My Mum is on Strike.’

In the late 1970s, parents in Walthamstow, London started the first neighbourhood co-operative nursery which officially opened in 1986 and closed in 1993. To celebrate this, the oral history collective On the Record has put together an exhibition at the Mill, a community centre in Tottenham called ‘Doing it Ourselves.’

I was particularly interested in this exhibition as just up the road, at a different community centre, I was part of a collective who had organised a radical ‘stay and play’ for International Women’s Day, 2019. We called our event ‘My Mum is on Strike’ and similar events were then organised in Deptford, Tooting, Haringey, Clapton and in Cardiff. We said we’d be happy if 10 people came to our event in Walthamstow and then 150 people came.  Over five hundred parents and kids participated in the events across the country. In this article I will discuss the ways these two projects speak to each other. Although they operated at different times, in different contexts and for different durations, they were motivated by shared dreams of childcare that is just, radical and redistributed. 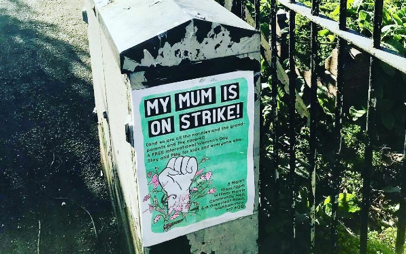 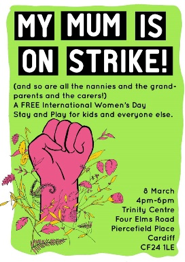 two posters advertising my mum is on strike from https://womenstrike.org.uk/my-mum-is-on-strike/

Two posters advertising my mum is on strike from https://womenstrike.org.uk/my-mum-is-on-strike

The ‘Doing it Ourselves’ exhibition explores the childcare landscape of 70s and 80s Walthamstow, which was very different than it is today. In 1981 there were only 20 full time, state funded places for every 1000 children under five in Walthamstow. The co-operative nursery was a response to this crisis; in exchange for affordable childcare for up to three days a week, parents worked in the co-operative nursery for four hours. I spoke to Rosa Schling, a managing director of On the Record who offered further reflections on the differences between now and then.  She suggested that today more women work outside the home. There is more childcare available overall but ‘it’s often totally unaffordable.’ Research reveals a similar picture, childcare fees have risen three times faster than wages in the past decade. At the same time nursery staff – who are predominantly women, very often women of colour –are ‘underpaid and undervalued.’ Rosa suggests that, now, as then, ‘we have a broken system and so, as a quote mounted on the wall of the exhibition states, ‘there needs to be something better.’

What we, like the first neighbourhood co-operative nursery, also sought to address was that caring for children is still largely considered women’s responsibility and can often be isolating. Oral history interviews with single parents, mostly women, involved in the nursery reveal how the project was, as Rosa says, a ‘lifeline.’ The nursery offered parents a chance to connect while simultaneously socialising this work. Similarly, through calling our event ‘My Mum is on Strike’, we acknowledged that caring for kids is work and that we could go on strike from it.[1] We wanted to re-frame caring for children so it is considered as legitimate work, rather than an inherent expression of what it means to be a woman.

The first community neighbourhood nursery also aimed to transform gender roles by employing an explicitly anti-sexist pedagogy. A film accompanying the exhibition shows children of all genders slopping marmalade and margarine onto bread and dressing up in a range of clothes. One of the children cheerfully asks an adult painting faces: ‘Can I have a beard? My dad has a beard at home!’ The nursery felt it was important that children witness men in caring roles and this is rightfully celebrated in the exhibition. While male parent members were in the minority, those who cared for children were committed to anti-sexist principles. As Andy Seddon said: ‘It was important I pull my weight. One morning I volunteered when we had 25 nappies to change.’  The kids present at ‘My Mum is on Strike’ were cared for by people on whose shoulders the caring responsibilities don’t usually fall on, so, mostly men. We also celebrate men who work to undo sexism, and a famous photo of cultural theorist Stuart Hall caring for kids at the first women’s liberation conference features on our posters.

The nurseries anti-racist principles were also on display. These clear, radical principles suggest that racism exists even in radical spaces, perpetrated by well-intentioned adults and must be addressed. These principles are hopeful; they suggest that adults must and therefore, can, transform. In this way the nursery was not just a space for children to learn and develop, but grown-ups too.

However, as the exhibition conveys, the collective didn’t always succeed at representing the diversity of Walthamstow; members of staff were Asian-British but there were few Asian-British parent members. Rosa said, ‘some people suggest that it was a white, middle-class project, while others don’t.’ However, Rosa said that in interviews, members highlighted how important the anti-racist approach was to people living in ‘mixed couples,’ and their children. In the case of ‘My Mum is on Strike’, our activities for children were explicitly anti-racist and included craft based on the fantastic Sisters Uncut colouring book. Our perspective is also hugely indebted to Black Feminism but white women were over-represented at this event and in our organising collective, so there is more work to do here.

Perhaps, when assessing the success of both projects, we ought to give the last word to the kids who attended. Liz and Siva Muniandy’s daughter Ellie who attended the nursery as a child, summed it up best. When she had to leave she said, ‘but these are my people.’ The day after our event, one five-year-old attendee, Gene made us a card that said: ‘THANKS FOR MAKING AN AMAZZZING SPACE!!!!!!!!!’

While different in terms of duration and context, ‘My mum is on strike’ and the first neighbourhood co-operative nursery are connected through a shared repertoire of dreams. The parents and carers of the nursery, like us, dreamed of something different, of a world where we all eat, play, live and fight together. There is much to celebrate and much to be done.

With great many thanks to Rosa Schling for her time.

This article was partially based on a conference paper that Dr. Claire English and I gave at Goldsmith’s College on 14 September 2019. With thanks, as always, to Claire.

[1] Though we would have to employ different tactics to the industrial strike which we have talked about elsewhere.