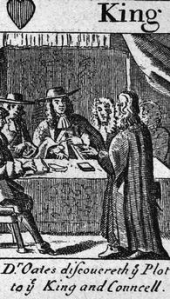 Playing cards were meant for much more than games in late seventeenth century England. They flourished as a medium for conveying political events and (mis)information. This particular pack, which was illustrated by Francis Barlow, details the ‘Popish Plot’ (1678-81): a fictitious conspiracy alleging that an extensive cabal of Catholics were plotting to assassinate Charles II and place his Catholic brother, James Duke of York, on the throne. The Plot detonated latent anti-Catholic paranoia in Restoration England and resulted in the greatest political crisis of Charles II’s reign. At least 22 alleged plotters were executed – the five of clubs depicts the hanging of five Jesuit priests. The country was brought to the brink of civil war and opposing ‘Whig’ and ‘Tory’ parties began to crystallise in Parliament.

The Plot’s narrative is vividly shown across the pack. The ace of hearts shows the Pope and his cardinals first hatching the plot in Rome. The suit of spades depicts the murder of Sir Edmund Godfrey, the discovery of which shocked the nation and fanned the flames of the plot. The cards, probably produced towards the end of 1679 when the paranoia instigated by the Plot was at fever-pitch, proved so popular that at least three editions of the pack were published. They are a powerful reminder of how politics and conspiracy infiltrated even such leisurely moments as a game of cards.

From: Advent Calendar 2020, Doing history in public
← 7. The Pot on the Windowsill
9. The Victoria Falls hotel trolley →
No comments yet