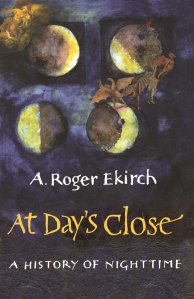 The premise of A. Roger Ekirch’s At Day’s Close is a relatively simple one: what was nighttime like in Western society before industrialisation and modern lighting? Yet the result is a rich and fascinating study of ‘the forgotten half of the human experience’ and of a fundamental shift that took place between the late 17th and early 19th centuries in Europe. Drawing from evidence in diaries, correspondence, memoirs, court records, plays and illustrations, Ekirch highlights the stark contrast between our own experience of nighttime and that of our ‘pre-industrial’ ancestors.

Perhaps most interesting of all is the evidence suggesting that Europeans did not get their eight hours in one go and instead enjoyed two sleeps, which were separated by ‘up to an hour or more of quiet wakefulness midway through the night’. Ekrich shows how during this ‘nightly resurrection’ people tended to carry out activities such as sewing, smoking, storytelling, stealing firewood, having sex, visiting close neighbours and reflecting on their dreams.

At Day’s Close also explores the idea of the demystification of darkness, a process that was underway by the mid-eighteenth century. Ekirch links the increasing use of artificial lighting with a decline in superstition (which he refers to as ‘disenchantment’) as well as greater opportunities for evening entertainments in urban public spaces, such as the theatre and pleasure garden.

Yet advances in lighting were not always welcomed. Artificial lighting was, according to one contemporary, a form of ‘pitiless publicity’ and brought new tensions between public safety and personal privacy. Ekrich similarly laments the birth of our modern 24/7 society and the lost opportunity that was afforded by darkness for ‘privacy, intimacy and self-reflection’.

Although he could be accused of romanticising the nighttime we have lost, Ekrich’s interdisciplinary approach is refreshing and draws on studies in medicine, psychology and anthropology. What is more, as the result of twenty years of archival research, the book is crammed full of contemporary illustrations and personal experiences. For the social and cultural history nerds among you, it is a real treat.

Where can I read it?

In a Cambridge library – there are copies in the University Library at Cambridge.

Alternatively, you could grab one second-hand from http://www.abebooks.co.uk/ or as an ebook from http://www.hive.co.uk/ebook/at-days-close-a-history-of-nighttime/17651792/.

Tags: cultural history, early modern history, interdisciplinary, modernity, social history
From: Bookshelf, Ella Hollowood
← Agnes of Poitou (c.1025-1077) and ‘Medieval’ Attitudes to Women in Power?
Historians and correspondence: The case of Jews’ letters to the Fascist Ministry of the Interior →
No comments yet