Exposing the ‘Naked Man’: A 16th-century motif of cultural nudity 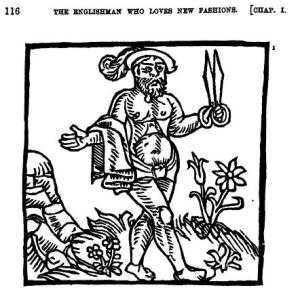 “Everyone’s way is made known through clothing” said Hans Weigel, author of a 1577 costume book of Nuremberg which illustrated the dress of a variety of nations.[i] In Renaissance Europe, it was expected that one’s countrymen would be identifiable through distinctive modes of dressing.

Yet this expectation was frequently challenged. Foreign fashions were enthusiastically adopted across sixteenth-century Europe to the dismay and ridicule of moralist commentators. Intercontinental warfare along with shifts in political territories and allegiances lead to the increased mobility of fashions across national borders. The infiltration of foreign fashions into local attire was a threat and a reality passionately debated. Concerned this practice would disrupt clear expressions of the dressed body politic, critics across Europe, argues historian Elizabeth Currie “anticipated and fought against the loss of the immediately identifiable citizen.”[ii]

Nowhere was this fear better expressed than in the anecdote of the ‘Naked Man’ – a remarkably popular motif that manifested itself in the visual and literary discourse of the period. Bearing a bolt of fabric, a pair of shears, but nothing else, the Naked Man represented cultural nudity of the starkest order. One of the first appearances of this motif was in English physician Andrew Boorde’s 1542 poem The natural disposition of an Englishman. Accompanying an illustration of the Naked Man, Boorde’s poem narrates the Englishman’s predilection for new fashions, resulting in the lack of a distinguishable, traditional outfit:

I am an Englishman, and naked I stand here

Musing in my mind, what raiment I shall wear;

All new fashions be pleasant to me.[iii]

The Naked Englishman is pictured en route to the tailor to have the latest fashions cut. The negative influence of foreign attire is suggested by his fascination with foreign cultures: “I will learn Latin, Hebrew, Greek and French.”[iv] Too easily swayed by other cultures, his commitment to England is questioned. Nakedness, seen as synonymous with exposure and vulnerability, here renders ‘England’ defenceless to the influence of foreign nations, inviting dangerous political implications.

Between the years of 1567-81, the Dutch painter Lucas de Heere produced a costume manuscript portraying the dress of various nations as a commission for an English admiral. De Heere ends his book with a picture of a dishevelled Naked Man holding up his shears and fabric. A former pupil of De Heere’s provides a fascinating account of this project in the biography of his teacher:

When all but the Englishman were done, he painted him naked… When the Admiral saw this figure he asked Lucas what he meant by it. He answered that he had done that with the Englishman because he did not know what appearance or kind of clothing he should give him because they varied so much from day to day; for if he had done it one way today the next day it would have to be another – be it French or Italian, Spanish or Dutch – and I have therefore painted the material and tools to hand so that one can always make of it what one wishes.[v]

The anecdote is an exaggerated account, and it seems more likely that the Admiral wanted to make a point about changeable English fashions than the Dutch painter. There was great shame in one’s kinsmen having permeable dress habits, and this is further evidenced in a 1623 retelling of the anecdote of the painter which featured in an Elizabethan sermon. The painter’s predicament was blamed on “our phantasticall devises’ which ‘make ourselves laughing stocks to other nations.”[vi]

The Naked Man was not just an English motif. In Venetian Cesare Vecellio’s 1590 costume book the anecdote is again recounted, but this time it is an Italian figure who was “so changeable, mutable and capricious in his dress” that he was presented naked. He also appeared in a 1571 embroidered chimney-hanging that hung in the Leipzig town-hall.[vii] The hanging presents nine costume figures, including a Frenchman and an Italian, and concludes, as we would expect, with a naked German carrying cloth over his arm. An accompanying inscription relates that because he is fond of the clothing of all other nations, he is at a loss as to which one of the others’ dress he should choose.

The Naked Man proved a potent motif to encourage the maintenance of local dress habits. It would seem his primary use was to counteract a sartorial ‘schizophrenia’ problematically intensified by the popularity of foreign modes. The shame in his nakedness hoped to dissuade fickle shifts in fashionable taste and to encourage patriotic ties of allegiance through dress.