Critiquing cultural spaces: an interview with Alice Procter of the Uncomfortable Art Tours 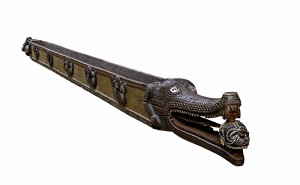 Alice Procter is a historian of material culture based at UCL. She has six years of tour guiding experience at heritage sites and galleries and runs Uncomfortable Art Tours, podcasts and writes under the umbrella of The Exhibitionist. I had the chance to interview you her about her work and to discuss how her tours fit into wider critiques of national history, spaces and narratives.

I first came across Alice Procter’s Uncomfortable Art Tours on social media with the word “Thief” emblazoned on an image of Queen Victoria. This provocative image, alongside many others, intentionally created to invite attention, piqued my interest. I attended one of her tours at the Tate Britain. As we moved through the gallery, Procter highlighted particular images and objects, critiquing the “official narrative” and expanding on, often limited, description labels. The Uncomfortable Art Tours are just that, uncomfortable but also stimulating, engaging and a necessary critique of cultural institutions. Her tours focus on how major institutions came into being against a backdrop of imperialism. On her website, Procter asks important questions through her tours, “in a country that’s repeatedly failed to come to terms with its colonial past, led by politicians who seem to think the past is the future, we seek to resist triumphalist nostalgia with art history. How did the narratives of Empire come into being? Who controls them? And how can we learn to see through the whitewash to the truth?”

Mobeen Hussain (MH): What made you start the Uncomfortable art galleries and museum tours- a particular incident or experience?

Alice Procter (AP): It wasn’t so much one incident as the experience of spending years studying art history, working in museums, and wanting a space to think about the history of empire but never finding one. I would write papers on colonial artists, or refer to decolonial theory in class, and feel like I always had to explain it to the people around me – who were mostly white and English, and had never really spent any time reflecting on these histories. A few galvanising moments were the Royal Academy’s Australia exhibition, the British Museum’s Indigenous Australia exhibition, and the Artist and Empire exhibition at Tate: all three skimmed over contentious events, and overwhelmingly presented positive stories that didn’t grapple with the institutions’ role in creating and perpetuating racist, imperialist spaces. There was a hole in the story that the museums weren’t addressing, so I decided to try.

MH: What has the responses from the museums and galleries been?

AP: For the most part, the museums have ignored me or not engaged with me directly. I’ve had some really kind and supportive reactions from individuals, but nothing official. To be clear, I see my work as running alongside the institutions’ stories, to contextualise and expand on it, not as a substitute or rival. I want museums to be better, and more representative of the public they’re supposed to serve. I can share a story that they aren’t acknowledging – I hope one day it won’t be necessary for outsiders to take all this work on.

MH: How do you think institutional spaces of culture and memory should reform their curatorial practices to be more mindful and ‘decolonial’ in their work?

AP: One of the most immediate things these spaces can do is acknowledge the gaps in their history – what stories aren’t in their collections, whose voices have been erased? It’s about starting from a point of self-awareness, being receptive to criticism, and recognising that we’re all working to do better.

Being represented isn’t the same as being included, but inclusivity won’t come without diversity. Without genuinely open, welcoming and receptive staff rooms that reflect a diversity of experience, and budgets and hiring structures that recognise the work of challenging and unravelling institutional histories (without forcing individuals to become spokespeople), I don’t think any reforms will stick.

MH: Can you briefly share one object or image of interest that you feel that should be displayed to ‘uncover the truth’ or to provide a more accurate or nuanced perspective?

AP: There’s a feasting bowl from the Solomon Islands that’s been in the British Museum since 1903, but it’s currently on show for the first time in the Oceania exhibition at the Royal Academy. It was taken during a raid by British soldiers on the village of Kalikoqu, Roviana Island, in 1893, part of a campaign of violence designed to stop Islander communities attacking European and settler merchants. The campaign was led by Captain Edward Davis, who claimed that the feast bowl was used in cannibalistic rituals – despite being told by local people that wasn’t the case. It’s sought for repatriation to the Solomon Islands National Museum. The fact that the bowl hasn’t been put on display is part of a bigger issue with the British Museum only showing a very small part of their Oceanic and Pasifika collections, and also suggests that they’re aware of its illegitimate provenance. Now, as part of the RA show, there’s basically no mention of how it was acquired, though the curators have strongly emphasised that most of the works in the exhibition were acquired through trade. It’s thoughtless at best and deceptive at worst – this is an object taken through violence, with a story fabricated by a British captain to justify the harm done to its source community, and by not addressing that in the exhibition space the RA (and the British Museum) are perpetuating that harm. There is a little more information available in the exhibition catalogue, and on the British Museum’s website, but no explanation of why this choice was made.

MH: You mentioned, during the tour I attended, that you are Australian, a lot of the work you critique comes from the Global South, do you think that there is a difference in the way that museums and galleries display representations and images of white settler colonies (and objects from these colonies) in comparison to images of, and objects from, other colonial endeavours in Asia and Africa?

AP: A lot of my research in the past has focused on white settler mythologies, and the construction of national identity in that context, so it’s also something I’m more confident in sharing as part of a tour. I find that objects from white settler colonies tend to be very dislocated in British museums – objects by Indigenous Australian or First Nations Canadian artists will tend to be presented with the stories of the white people who acquired them, in a way that distances them from living communities. It’s a reflection of the ongoing dismissal of Indigenous communities, to falsely represent these objects as from a distant past time. There’s a slightly different treatment of colonial history in places that don’t have this white settler population, where there hasn’t been this deliberate destruction of Indigenous life to the same extent.

MH: Do you think your position of relative privilege as a white woman has affected the reception of your tours? If yes, how so? And do you think these tours would be tolerated in the same way if led by a person of colour?

AP: I can obviously only speak to my own experience, but I know that I have a huge amount of privilege in museums – I’m a young white woman with an art history degree and experience as an official tour guide, which means I can slip under the radar with the work I do. If you see one of my tours, chances are you won’t pick up on what’s different about it unless you listen in. My privilege is probably most present in the fact that I feel at home in these institutions. I’ve never been forced to justify my presence there in the way that people of colour I know have. I created the tours to address a white audience I knew were ignorant of colonial history, and it’s important for white academics and museum professionals to take on the work of correcting their biases instead of pushing that work on to people of colour. I don’t want to erase the work done by artists and museum professionals of colour – my goal is to take on my share of that labour.

MH: Any tips on how best deconstruct and complicate official histories of imperialism, empire and colonialism and legacies of violence in museums but also in other educational institutions?

AH: Look for the language being used – are Indigenous and pre-colonial place names being used, or only the imposed and anglicised ones? Are objects being ‘collected’ or ‘acquired’, without details? Are makers listed as unknown when the European collectors are named? It’s difficult to unravel this, but learning to spot some of these clues is a good place to start. Be open to criticism when you make mistakes, and learn from it, but don’t demand people teach you how to be better. Ask questions if you can! Talk to people you know and discuss these spaces. The stakes are high right now, and this is about a lot more than just museums. Join book clubs and unions, go to talks, use twitter and find activist networks, because all of this history is present and active in the world we live in – it’s our responsibility to challenge and critique it. There’s no neutral option. You’re either resisting, or you’re complicit.