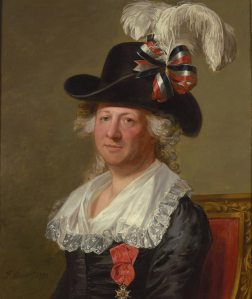 Alex is a PhD candidate in the Faculty of History. His thesis is entitled “Imprisonment for Debt and Women’s Financial Failure in the Long Eighteenth Century”.

Before the eighteenth century, it was potentially possible to stand at the window of an English townhouse and gaze out across the milieu of different classes, ages, and ethnicities crowded in the streets below and immediately understand what an individual person was and where they belonged in society. People dressed their status, not simply out of choice, but in accordance with law. Sumptuary laws were regularly enacted from Edward III’s reign into the early modern period though they weren’t always as regularly enforced. These laws listed with varying degrees of specificity the type, cut, colour, and style of dress for various members of society. For example, in 1562 Elizabeth I’s government declared that ‘No Englishman other than the son and heir apparent of a knight, or he that hath yearly revenues of £20 or is worth in goods £200, shall wear silk in or upon his hat, cap, night cap, girdles, scabbard, hose, shoes, or spur-leathers, upon forfeiture of £10 for every day, and imprisonment by three months’.[1] With the onset of the Consumer Revolution post 1660, the popular diversification of dress that came with cheaper material and greater consumptive desire led to vain calls from some gentry to reenact sumptuary legislation. However, a century later there was clearly no going back. The street was now a vista of confusion with the tradesman and the baronet sporting similar clothes. Nevertheless, certain identities could still be easily discerned. Men and women’s clothing (despite claims of the feminization of male dress) were still very separate and resulted in easy differentiation. That is, as long as they wore the clothing they were supposed to.

William Hutton, the Birmingham bookseller and historian, sat for nineteen years as a Commissioner on the city’s Court of Requests – an arbitrary justice machine that dealt with small debts (i.e. below £2) without the need for lawyers or even juries. In his time on the Bench, Hutton claims to have dealt with over 100,000 cases, 94 of which he describes in his 1787 book on the court. Most cases lasted a matter of minutes with the plaintiff or defendant easily convincing the Bench of their case before they moved on to the next quarrelsome pair. Hundreds were dispatched every Friday afternoon. In this light, the case of Betty John is notable simply for having taken ‘three or four days’.[2]

The problems of identity in this case are apparent from its very opening:

Hutton and his fellow Commissioners were served no better when the defendant arrived in Court dressed as a woman yet bearing the contemporary characteristics of a man: ‘rather elegant, of a moderate [height] … had a firm countenance and manly step, no beard, … a voice tending to the masculine, with manners engaging’. The defendant – who Hutton terms on occasion ‘the animal’ or ‘it’ not necessarily in a derogatory fashion but mostly out of sheer confusion and lacking the terminology of gender fluidity – claimed to have been married to a man in Staffordshire and that she was therefore not responsible for the debt she was charged with under the laws of coverture (which precluded a wife from accruing debt, it belonging to their husband as a form of property). However, she was also commonly known to have, while dressed as a man, ‘courted a young woman, married her, and they lived together in wedlock, till the young woman died, which was some years after, and without issue’ subsequently keeping a mistress ‘like the people of higher rank’.

The Court decided based on the behaviour of the defendant, lacking the comfortable reliability of dress, that she was a man in disguise. Having been known to ‘swear with a tolerable grace, get drunk, smoak tobacco, kiss the girls, and now and then kick a bully’ it appeared impossible that she could be female. Furthermore, they argued that, since her wife had never complained about a breach of the marriage contract, ‘there was no defect’ in her breeches. Similarly, Hutton claimed that ‘Neither would a girl sacrifice her reputation, by becoming a mistress to a woman in breeches’. Further “iron-clad” evidence of her masculine nature included that she was ‘well versed in the art of kicking … it is an art never thoroughly understood by the beautiful part of the creation’ and that ‘she spoke but little, which was no indication of her being a woman’, female defendants being known to Hutton for their clamorous nature. Having defaulted on the ordered payments Betty John was imprisoned for her debt as a man. Subsequently, the mysterious Staffordshire husband appeared and in prison ‘it appeared from incontestable proof’ (possibly a search of her body) ‘that she was a real woman’.

This particular case offers a rare snapshot of an instance of historical gender fluidity, something we often only ascribe to our own era. This person, probably a woman, seems to have flitted between male and female personalities as it suited her – being known in Birmingham ‘in the dress and character’ of two separate genders and persons. It additionally shows a contemporary lack of understanding of lesbian activity. While sodomy was much debated by intellectuals such as Bentham and the crime appeared regularly in courts, it would seem that, at least amongst the three Commissioners here, the idea of same-sex activity between women made no sense. They couldn’t even comprehend it – Hutton writing that ‘a woman receives little more pleasure in saluting a living woman, than a dead one; whereas a man … seemed to receive a pleasure inexpressible.’ Other than this though it shows how much contemporaries relied on the comfort of appearance and when on occasions like this that was broken, they instead relied on stereotypes of character to quantify gender in the same way that they had come to differentiate between tradesmen and gentlemen by the manner of their speech and behaviour, having lost the comfort of clothing. It is impossible to say how common an occurrence this rare example was or how pervasive the experience – many of the people in the case were clearly baffled. The very confusion exhibited and the court’s incorrect gender assignation might though suggest the existence of many more invisible transgender or gender fluid persons in Enlightenment England, lost forever to the record as they cunningly hid their biological identity.

(Image is The Chevalier d’Eon by Thomas Stewart, the most famous transvestite of the 18th Century – public domain, via wikimedia commons)

[1] Noting Certain Statutes to be Enforced, issued by the Privy Council, Westminster, 7 May 1562, 4 Elizabeth I http://elizabethan.org/sumptuary/fines.html

[2] All quotations: William Hutton, Courts of Requests: Their Nature, Utility, and Powers Described, with A Variety of Cases, Determined in that of Birmingham (Birmingham: Pearson and Rollason, 1787), 419-430.