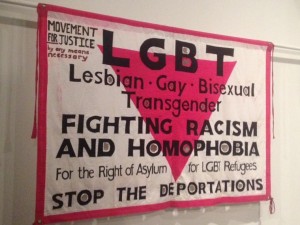 Fifty years since the partial decriminalisation of homosexuality in England and Wales, Nailya Shamgunova (@nailyas_) reflects on how public exhibitions have engaged with this event.

This year marks the 50th anniversary of partial decriminalisation of homosexuality in England and Wales. It is an important milestone for queer history, and as such it was commemorated in various forms throughout the country. I attended four different exhibitions in three museums, two in the North and one in the capital, prompting me to think about the ways in which we remember and display queer history.

Two particular themes stood out to me. The regional character of the way the past was displayed was very apparent; so was the continuing importance of activism here and now in both understanding queer past and moving it forward. I was somewhat disappointed in the highly publicised Queer British Art at the Tate Britain, London – it felt tame, mild and toothless. It presented a somewhat positive story of the development of queer identities from the late Victorian times to the year of decriminalisation itself. The exhibition too often focused on art by British artists who would today be probably identified as queer, leaving less space for artworks dealing directly with queer issues and the historical context of those works. Intentionally or not, the exhibition presented too rosy a picture of what it meant to be ‘queer’ in the first half of the 20th century – it was easy to miss the struggle, the pain and the discrimination amidst all the parties in Bloomsbury and Soho. The video installation documenting stories of queer identities at the very end of the exhibition rectified that somewhat.  In comparison with the Northern take on the subject, the London exhibition was restrained and conformist.

The exhibitions in Manchester and Liverpool benefited from covering the period up until today, which allowed for more continuity and a greater focus on the fight for equal rights. The Liverpool Coming Out exhibition, although nominally commemorating the anniversary, focused primarily on contemporary issues. It was the most interactive exhibition out of the four. A special room was dedicated to writing your thoughts on issues ranging from your own gender identity to the role of gender in our lives. Most of the accompanying material aimed to explain current issues in queer community, from non-binary gender identities to biphobia, to the general public. Although the art itself wasn’t as high profile as what the Tate could offer, its clear explanation of queer issue was superb.

The exhibitions in the People’s History Museum in Manchester reflected the proud history of both the museum and the city it is in. Queer Noise, the smaller exhibition out of the two, focused on the relationship between popular music and queerness in the last 50 years. A significant part of it focused on the queer club scene in Manchester itself. Never Going Underground had a more general part, focusing on the history of queer activism, and a room dedicated to art by transgender and genderqueer artists. The history part was both informative and emotive, including things like extracts from diaries and newspapers. The art part was bold, fresh and stimulating. Overall, the museum presented a comprehensive and varied look at what it meant and still means to be queer in England.

Both the Manchester and the Liverpool museums also focused on bringing out the queer in their main collections. The Walker Gallery, full of ‘old masters’ and Victorian art, signposted anything of interest to queer history, and included an introductory banner at the main entrance. The People’s History Museum included installations about the role of queer activism in intersectional issues throughout 20th century history in England – there were display cases focusing on the not always glorious relationship between queer activism and the Labour party and banners made by LGBTQ+ groups protesting things from deportation of immigrants to involvement in wars. This trend of incorporating queer history into the general themes of the museums is most welcome – although queer history deserves commemoration and exhibitions of its own, it should ultimately be regarded as part of the historical ‘mainstream’.

Overall, I was very impressed with how the museums in Liverpool and Manchester dealt with the issue – they stayed true to the traditions of their respective institutions and produced fresh and much needed perspectives. I don’t think we are yet in a place where we can afford to neglect the struggle, be it personal or political, in commemorating queer history.