In recent years, it has become fashionable to talk of an ‘archival turn’ in history, in which the site of record-keeping has itself come under scrutiny.[1] At the same time, material history has risen to prominence as an intriguing counterpart or companion to the paper-trail left by written documents.[2] As someone who became fluent in the visual language of a museum long before I encountered academic history, I like to think of a fashion gallery as something that can be ‘read’ in similar ways to an archive, combining the perspectives of both historiographies.

Scholars of the archive have long realised that documentary sources most typically reflect the lives of the wealthy and educated, especially the further back one travels in history. Similarly, the clothes of the rich predominate our fashion galleries. Not only are they often made of better-quality – and thus longer-lasting – materials, but the more expensive a garment is or was, the more likely its owner (or indeed a museum curator) will want to treasure it for future generations. ‘Inevitably,’ writes the senior curator of textiles at the Victoria and Albert Museum, ‘the story reflects elite culture,’ and any historian of dress must be conscious of this inherent bias in their work.[3]

Perhaps more surprisingly, that story also tends to reflect the experience of youth. Clothes made for children or adolescents hundreds of years ago are likely to survive in better condition, as their owners grew out of the garments before they could wear them out, while many adults would wear or repair their clothes until the end of the fabric’s lifespan.[4]

Together with recognising the particular slant of a fashion gallery’s content, it is important (as archival historians would agree) to acknowledge the way in which the material is presented to us. Typically, dresses are shown on some sort of mannequin form – a presence most noticeable when curators get it wrong. Queen Elizabeth II herself briefly became a commentator on questionable displays of dress when she was taken to see a Buckingham Palace exhibition of the Duchess of Cambridge’s royal wedding dress. On seeing the gown displayed on a mannequin without a head, and the veil suspended eerily above, the Queen was overheard remarking, ‘It’s horrid, isn’t it? Dreadful.’[5] 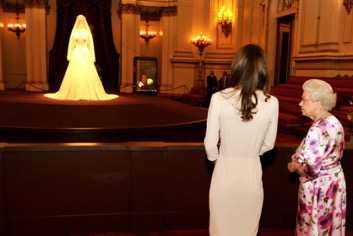 The use of mannequins without human features, such as heads and hands, can appear disturbing at times, and can even carry an inappropriate amount of dark humour (e.g. a dress thought to have belonged to the guillotined French monarch Marie-Antoinette being shown on a mannequin without a head). When done tastefully, however, featureless mannequins can help focus attention on the item of clothing itself. The Bowes Museum recently renovated its Fashion and Textiles Gallery and decided to mount its dresses on near-invisible clear frames. The designers found that ‘the absence of the body seems to evoke more empathy’, perhaps because the placement of the clothes within the display cases occasionally allows the viewer to see their own reflection in the glass, as if wearing the garment.[6] 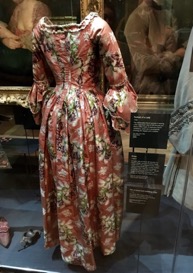 In contrast, the V&A’s recent Frida Kahlo: Making Her Self Up exhibition turned the visible mannequin into an art form in itself. It was the first time that the artist’s clothing had been displayed outside Mexico City, and for the occasion, the museum commissioned custom-made mannequins using 3D rendering and printing. They were designed to show a stylised depiction of Kahlo’s face, portraying her as if cast in stone, like a Mexican idol.[7] These two examples represent opposite ends of a spectrum of dress display, since the former exhibition displays clothes typical of period or national style where the original wearer is of less importance than the features of the garment itself, and the latter was an exhibition constructed around the idea of the wearer’s identity.

In an interview, Natalie Zemon Davis discussed the unique quality of studying wearable objects. There is a ‘moment of empathy,’ of thinking ‘what it was like to wear that,’ an instantaneous impression of ‘shared life’ between scholar and an individual from the past.[8] Although, as Davis tells the interviewer, this emotion ‘doesn’t always surface in your writing,’ I believe that it is an important part of the historian’s experience when encountering historic dress, and thus it is important to recognise the factors (such as display) that shape this feeling. Therefore, history students should be encouraged to venture into museums with a greater understanding of how to ‘read’ a gallery, and the confidence to analyse what they see with the same attention to detail with which one might treat an archive.

Image 3: The Duchess of Cambridge and Queen Elizabeth II viewing the royal wedding dress at Buckingham Palace during its Summer Opening, 2011