‘Twittering Historians: On Active Duty in the Rapid Reaction Force’ 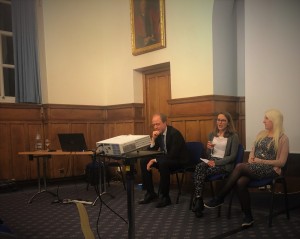 DHP were invited to speak at the Public and Popular History seminar on 5 February 2020. We sent along our Editor, Stephanie Brown, and member of the editorial team, Laura Flannigan. Also, on the panel was Dr Robert Saunders (Queen Mary London), who is a prolific author on nineteenth and twentieth century British politics, including his acclaimed book Yes to Europe: The 1975 Referendum and Seventies Britain (2018).

The seminar, entitled ‘Twittering Historians: On Active Duty in the Rapid Reaction Force’, aimed to discuss how historians can use Twitter and blogs to combat ‘fake history’. For those who were unable to attend, this blog will summarise the key points made by Robert, Stephanie, and Laura.

Robert argued that the public utility of history, as a discipline, depends on our ability to communicate it to the public. There is a huge appetite for history outside of academia, and Twitter provides a wonderful tool for public engagement. He argued that historians could play three roles, in particular, in contemporary politics. First, they can provide a collective memory that has largely been lost, owing to the short duration of political careers and the historical ignorance of much of the political class. Second, they can act as mythbusters, challenging the distorted versions of the past so often put forward to justify political action. Third, they can remind a very present-centred political class that things that may seem natural or fixed are in fact contingent and unstable: that they have been different in the past, and can be different in the future. In this respect, history serves to destabilise the comfortable assumptions of the present, and to undermine complacent assumptions.

Stephanie argued that to combat ‘fake history’ it is often assumed that historians need to be rapid, reactionary, and, at times, confrontational. This can be a dangerous expectation. Just as it takes months for an academic book or article to be published, history blogging is a length process – or at least it should be if we want to ensure that the information is well researched. Rushing to weigh-in on a particular story can lead us to share ideas that are not fully formed, disrupt our work-life balance, or see us get drawn into ‘Twitter-fights’ – none of which is good for our wellbeing. Nevertheless, history bloggers can be equally useful in combating ‘fake history’ by taking a proactive approach. In today’s digital age, if people want to know something they Google it. Thus, it is important for historians to share their research online. It is not always about reacting to ‘fake history’; it is equally important to make sure that accurate information is available when people are looking for answers. In turn, the more we collectively share our knowledge, the easier it will be to react to ‘fake history’. DHP are very fortunate to have a regular window to share research – the opportunity to talk about lesser known histories, or to correct common misconceptions. Our posts stay online and can be accessed, at any time, and can be found via a Google search. Public history can act as a vaccine for ‘fake history’, as well as a cure.

Laura outlined that a large proportion of today’s PhD students have grown into adults and researchers with social networking. We’ve seen it transform from a form of personal networking, for posting short-form thoughts to small circles of friends, into a professional profile.  Careers events often recommend that students be active on Twitter and utilise it as a hub for other online activity. It certainly has many benefits: it’s where we share our articles, blogs, and experiences, advertise our conferences and papers, seminars, and hear from colleagues in our field. As young academics we may doubt our right or capacity to intervene and contribute to quick-fire debates otherwise dominated by more senior scholars or non-academic historians. Yet increasingly historians of all career levels are using Twitter to cut through ‘fake news’ and false assertions not only about history, but about universities, faculty organisation, and the state of History as a discipline. Criticism of working practices (#manels, for example) mixed with defence of the aims of academia has become more abundant in the context of the recent UCU strike action and growing scepticism in certain elements of the media about universities and their experts. Historians are becoming a ‘rapid reaction force’ on behalf of ourselves, our discipline, and the academic profession more broadly. This may well be the necessary foundation for effectively challenging ‘fake news’ and abuses of history in the public eye more generally.

DHP would like to thank the Public and Popular History seminar convenors for an excellent, thought-provoking event, and we look forward to continuing the discussion online.