On Saturday 19 October 2019, five members of the Doing History in Public editorial team spoke at the Festival of Ideas. We sought to uncover echoes of today’s headlines in unexpected places and explore the historical roots of current issues. Stephanie examined the links between medieval and modern knife crime; Laura discussed the ‘the will of the people’ today and in Tudor England; Aoife explained how lessons from the Irish famine can help us respond to the migrant crisis; Mobeen showed how today’s beauty industry is shaped by legacies of racism and colourism; finally, Helen asked does today’s youthquake have a longer history? This blog will summarise the key points of each speaker.

Stephanie: Today the most common weapon in cases of homicide is a knife or sharp instrument. My doctoral research focuses on homicide in Yorkshire, 1345 to 1385. I found it striking that, like today, the majority of homicides reported in these medieval coroners’ rolls were committed with a knife. It seems that knives were as much a problem in the middle ages as they are today. Nevertheless, historians must be careful when comparing the modern day with their historical period. To understand late medieval violence, one must first understand the society. Firstly, there was no standing army, yet it’s a period of warfare. Weapons were a part of everyday life which they just aren’t for most of us today. Secondly, although weapons were available, there was regulation setting out who could own which weapons. Nonetheless, almost eight-five per cent of the knives in my sources appear to be everyday items – designed for food preparation, hunting, or as tools. They were not primarily designed to kill, therefore, were not covered by legislation. Knives are problematic for both societies because of their availability, portability, and dual purpose. They feature the unfortunate combination of being small enough to carry, yet capable of inflicting fatal wounds. Today, we have legislation restricting the carrying of weapons and an age limit for buying knives. Nevertheless, knives are present in most homes, and can be bought legally. It’s their dual purpose as an everyday item which makes them an indispensable part of, and a threat to, our society. 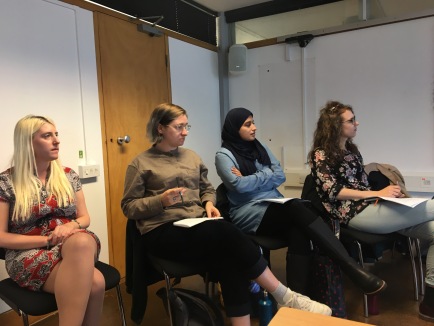 Laura: Last weekend, the notion of ‘the will of the people’ was raised on all sides of the House of Commons, without any clear consensus about who exactly is included in that category in today’s divided nation. One forum for expressing popular opinion that has recently gained traction, and scrutiny, is the e-petition. In the law-minded society of early-modern England, speculative petitions were one of the only legitimate means to seek redress from the government. They made it possible for competing visions of political culture and policy to emerge, just as we see today. Generally speaking, as the role of legal expertise and the need for expensive lobbying declined, and technology and mass forms of communication emerged, the process of political expression has been democratised. The advent of more clearly regulated forms of political expression seems to have left the role of the petition a little unclear. The study of the surviving historical petitions can provide vivid insights into the lives and demands of past peoples. They also illuminate the development of today’s participatory politics. Nevertheless, defining a coherent ‘will of the people’ may be as difficult for historians as it is for current politicians.

Aoife: The past is both a gift and a challenge for the present. The Irish Famine has been invoked by politicians throughout history. Individuals like nineteenth-century nationalist politician, Charles Stewart Parnell, and republican activist, Maud Gonne, popularised the image of Queen Victoria as the unfeeling ‘famine queen’ who donated only £5 to Ireland and lived in opulence and splendour while her subjects across the Irish Sea starved to death. This story is untrue, as Queen Victoria actually contributed £2,000 to famine relief. More recently, the former, Taoiseach of Ireland, Enda Kenny, garnered international praise for his speech at the White House in 2017. Kenny described the welcome Irish emigrants received in the United States during the nineteenth century, and it was widely interpreted as a criticism of Donald Trump’s recently instated travel ban. However, in this instance, Kenny’s invocation of the past could equally have been used to criticise the actions of his own government, which in 2018 rejected 70 per cent of all applications for asylum. Hence, we must be wary of politicians, in the past and the present, relying on historical anecdote, and interrogate whether they are doing so in a meaningful way, or simply relying upon the past for a rhetorical flourish, or even pedalling a story that simply is not true.

Mobeen: Today’s beauty industry is shaped by legacies of racism and colourism. This can be shown through two geographical case studies, the Caribbean and India. Both are very different societies underpinned by their own specific historical contexts, but share experiences as former European colonies and societies where colourism (discrimination based on skin shade or tone) continues to be a pernicious and hierarchical force, though not unchallenged. The beauty industry has always and continues to idealise Eurocentric beauty ideals of fair skin by demonstrating how racialised images were used in the adverts of European companies throughout the late nineteenth and twentieth centuries to sell skin-lightening agents. These cosmetics included soaps, skin-bleaching creams, and make-up. Today, skin-lightening is a global industry worth billions of pounds with popular markets in Asia, Africa and Latin America but also amongst Caucasian women. My doctoral research historicises colourism and skin-lightening in colonial India to show how the commodification of personal grooming products has a much longer history than assumed; often big business of fairness products and beauty ideals is discussed as late twentieth and twenty-first century phenomenon. My historicisation of racism and colourism lends itself more easily to the task of establishing perennial connections between the past and present, but offers its own challenges in considering specific regional contexts and their heterogeneities.

Helen: Since starting my postgraduate research on late Victorian and Edwardian girls’ politics, youth political activism has burst onto the global political scene. Figures like Greta Thunberg, Ridhima Pandey, and Leah Namugerwa are putting politically active schoolgirls in the headlines. What started out as a niche research subject is now topical; I increasingly find that my work speaks directly to current affairs. Although this came about more by accident than design, I am excited to have the opportunity to put what is often assumed to be a recent phenomenon into historical context. In my talk, I traced the history of school strikes in the UK back to the 1880s. The historical continuities in adults’ attitudes towards youth politics are especially revealing. Enduring assumptions about young people’s political apathy and immaturity – rooted in a centuries-old binary of the innocent versus the rebellious child – continue to disenfranchise the child ‘citizen-in-waiting’. I’m interested in exploring how my research could inform recurring policy debates like the links between the school curriculum and national identity construction, if citizenship can be taught and how, and whether the voting age should be lowered. The key question for me is why are we surprised to find politically astute children and teenagers – both in the past and today – and, more importantly, what difference would it make if adults today really started to listen?

We are always interested to hear from historians whose work connects with current issues. Please get in touch if you can bring a historical perspective to a current political, social or cultural issue.

Images in blog: Taken by Georgia Oman who kindly volunteered to chair the event.

1 thought on “Current affairs or old news? DHP at the Festival of Ideas.”