Reformation parallels: the case of Gottschalk of Orbais 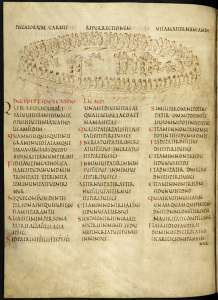 Five hundred years ago this October, the German monk, Martin Luther (probably) nailed his famous 95 theses to Wittenberg’s cathedral door. This sparked a lengthy and complex process of religious transformation across Europe. Luther’s views continue to have consequences for the modern world and as this anniversary approaches, there are many questions to ask about Luther’s legacy. It is, however, also instructive to consider the parallels between the Reformation and earlier Christian debates. How radical or new was the Reformation within the broader sweep of Christian history?

One instructive point of comparison was a similar debate begun by Gottschalk of Orbais almost 700 years earlier. Like Luther, Gottschalk was a German monk and like Luther, he was concerned with how and why God saved sinful human beings. He argued that those who were saved were such ‘through gratuitous benefit of [God’s] grace alone’, whereas the damned were such ‘through the most just judgement of [God’s] immutable justice’. Luther does not seem to have known Gottschalk but there were parallels between Luther’s language of ‘faith alone’ and Gottschalk’s of ‘grace alone’. In asking similar questions, both men came to similar conclusions which nonetheless put them on a collision course with various contemporary authorities.

Gottschalk’s views provoked fierce debate. Although he was publicly condemned and flogged at Mainz in 848, he continued to attract supporters. Dying in prison in the 860s, however, the debate waned and left only a limited footprint in medieval theology. Luther, by contrast, continued to drive the debate forward, with the result of a lasting division in western Christianity. The similarities and differences reveal a great deal about the history of Christian debate, for both historians and theologians. As modern scholarship about Gottschalk grows, there is an exciting opportunity for early medievalist and early modernists to compare how two different past societies managed major disagreements over key religious and philosophical questions.

As a final note, it is instructive that Gottschalk was first recovered by a later generation of reformers. James Ussher, archbishop of Armagh, produced the first edition of Gottschalk in the belief that he was a prototype Protestant. Ussher shows how the textual and intellectual inheritance of the Reformation deserves as much attention as its impact. With so much focus on Luther, we should not neglect the opportunity to explore his connections, not just with what came after the Reformation, but what came before.

Image: a ninth-century image of a Church synod – Public domain via http://psalter.library.uu.nl/page?p=187&res=2&x=0&y=0

Matthew Gillis, Heresy and Dissent in the Carolingian Empire: the Case of Gottschalk of Orbais (Oxford, 2017).

Dennis Nineham, ‘Gottschalk of Orbais: reactionary or precursor of the Reformation?’ Journal of Ecclesiastical History 40 (1989), pp. 2-18.

This post is a summary of an essay written for the Jubilee Centre (Cambridge)’s project ‘Reformation 2017’. This project explores various issues surrounding the Reformation of continuing contemporary relevance from a Christian perspective. These essays can be accessed here:

Tags: christianity, Luther, medieval history, monasticism, Reformation, religion
From: Doing history in public, Research, Uncategorized
← ‘In fair Verona, where we lay our scene’ – my research reconnaissance mission
Should we learn from history? →
3 Comments Post a comment