5. Empathy in the archives 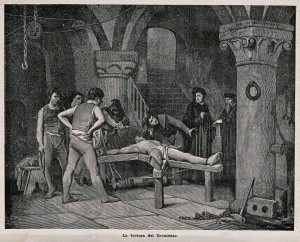 ‘Like death, like the cemetery which is at the centre of the village, violence is at the heart of life in the fifteenth, sixteenth, and seventeenth centuries’.

It is easy for the historian of early modern England to become desensitised to violence and suffering. Studying the religious changes of this period, changes which provoked individuals on both sides of the confessional divide to torture, burn and hang their fellow countrymen, the individuals involved can quickly become mere statistics to be utilised in support of an historiographical point.

However, I recently discovered a source in the archives which really brought home the human side of early modern violence. Amongst the Cecil Papers kept at Hatfield House, there is letter from one William Seth to the Privy Council, written during the Protestant reformation of Edward VI. Seth, who had been captured ferrying letters from English Catholics in exile on the continent to correspondents in London, had been interrogated at length for any information he might have on these dangerous ‘heretics’. Having been subjected to the rack and brought to financial ruin (prisoners had to pay for their own food, clothing and beds), Seth wrote of his utter despair:

“I am now in this my trouble…both fatherless and motherless, masterless, moneyless and friendless and now not knowing any friend in the world to whom I might make my moan unto or that would lend me a penny in this my necessity and trouble….[I] will be soon wasted and shall either rot and perish for lack of help and succour, or else being set at liberty be compelled to beg my bread. Rather than these miseries upon miseries should chance unto me I both have and will desire to have salty death to take away my poor life from me.”

Image: A man dressed in a loincloth is tortured on the rack with a priest bending over him to extract a confession. Wood engraving by B. Pug after J.M. Wellcome Collection (Public domain under Creative Commons) – https://wellcomecollection.org/works/gukzg6up.

From: Uncategorized
← 4. Journal of William Dixon, 1811
Capturing the Raj: visual narratives of British India →
No comments yet