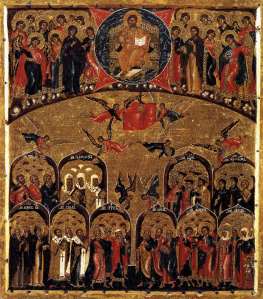 Vladimir Putin was unsurprisingly victorious in this month’s presidential elections on the 18th of March. As with all political campaigns, candidates routinely utilise powerful self-branding images. In Putin’s case, historic forms of Russian exceptionalism were re-imagined to run on a distinct platform based on anti-Americanism, similar to his previous campaigns. Michael Bohm, in a 2013 article, suggested that Putin was determined to turn Russia into the only leading world power that can hold its own against the U.S. This anti-American branding of Russian exceptionalism alongside long held notions of Russian Orthodoxy and Holy Russia were harnessed to amass public support throughout the election. His conservative stance on gay rights and support of the Russian Orthodox church are indicative of this.

Russian exceptionalism has in the past manifested itself in various nationalistic, cultural and ethnic forms. The ideas of “Holy Russia” and “Nationalism, Orthodoxy and Autocracy” are rooted in, or underpinned by, messianic language. Messianism (the belief in the coming of the Messiah in the form of leader, saviour or deliverer) is often rooted in the coming of Christ. In the modern period, this exceptionalism can be found in three distinct Russian ideologies: Russian Orthodoxy and “Holy Russia”, the Russian Revolution as a millenarian event, and a sovereign Orthodox Russia based on anti-Americanism and atomic power.

“A man who is not orthodox could not be Russian”; this statement from Fyodor Dostoyevsky’s Demons succinctly surmised the relationship between national ethnicity and Orthodoxy in mid-nineteenth century Russia.[1] The idea of Holy Rus’ (Holy Russia) as an epitome of eternal czardom of God in Heaven and on Earth in Tsarist Russia is one of the oldest and most enduring Russian perceptions about their place in history.  Part of this Holy Rus’ myth, was the messianic doctrine of Moscow as a “Third Rome”. Rome has historically been the source of authority for the Christian world since Constantine I. The fall of Byzantium (and Constantinople) in 1453, referred to as the second Rome, meant that Russia became the largest seat of Orthodoxy in the world and led to the belief that Russia was the inheritor of Byzantium and Eastern Orthodoxy.[2] In the fifteenth century, the monk Filofei prophesised that Russia would be the site of the Third and Last Rome before the Second Coming of Christ, the Messiah: “two Romes have fallen…and a fourth there shall never be”.[3]

This Third Rome was later localised to Moscow in Russian political thought as a distinctively Russian city. It was given impetus through the belief that Roman Catholicism had failed as the centre of Christianity; Dostoyevsky voiced this in The Idiot, raging that “Roman Catholicism is not even a faith, but is decidedly a continuation of the Western Roman Empire”.[4]  The restoration of Constantinople as the centre of Eastern Orthodoxy was also widely discussed extensively within Slavophile and nationalist circles in the 1840s to 1860s.

The seizure of power by the Bolsheviks in October 1917 was depicted as a millenarian event propelled forward by the proletarian masses to legitimise the Bolshevik regime. The revolution as an “Act of Man” was similar to religious millenarian ideals in the belief that redemption can be hurried through a collective intervention of men.  From this depiction of the revolution, the Cult of Lenin also emerged where Lenin was portrayed as a messianic leader in line with Marxist eschatology. Bolshevik discourse was permeated by Marxist values resonating with Judeo-Christian notions of time between the “Fall” and “Apocalypse”, and the proletariat as the “Messiah”.[5]  After the Second World War, this exceptionalism manifested itself in attempts at implanting, and propagandising, communist systems.

Russia went from Tsarist autocracy, to Communist State and collapse within 100 years. Exceptionalism, whether religious or secular, has endured within Russia political and intellectual thinking. In the twenty-first century, this exceptionalism, speared by Putin, include the expansion of Russian control and nuclear ambitions combined with renewed religion conservatism. [6] As Russian right-wing thinker Aleksander Dugin stated, Putin has been fashioned as Russia’s ‘katechon’; literally meaning the ‘supporter’ who prevents the coming of the Christ. Looking forward, it will be interesting to observe the ways in which Russian foreign policymakers use past ideological influences to emphasise new and enduring forms of Russian exceptionalism.