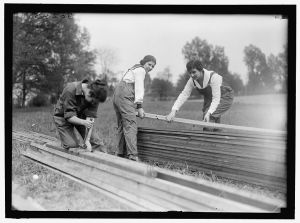 Modern-day Girl Scouts champion the importance of an ‘all-girl, girl-led’ environment in which girls can learn in ways tailored to their needs.[1] Juliette Low, founder of the Girl Scouts of America in 1912, had much the same attitude. Low saw Girl Scouting as providing girls with the adventure and activity of Boy Scouting, combined with womanly training through badges designed to teach proficiency in areas such as sewing and nursing, all within a safe and respectable female environment. The early Girl Scout movement was run by women who were often unmarried and had careers, providing girls with modern role models – ‘New Women’ who were challenging Victorian gender roles.

Unlike other girls’ organisations of the time – such as the Camp Fire Girls – the Girl Scouts embraced modern views on sport and activity for girls, providing a space where girls could take part in the same activities as boys, such as learning about planes or how to shoot. The Girl Scouts were at the forefront of changing ideas about girls’ health and fashion, encouraging girls to be strong and fit, instead of weak. Through community service work and an emphasis on patriotism, the Girl Scouts also helped to introduce girls into the public sphere and the realm of progressive reform, and during the First World War, the Girl Scouts conducted much of the same war work as their male counterparts.

The Girl Scouts’ ‘boyish’ programme and name provoked opposition from the Boy Scouts. Intended as an inherently masculine organisation in which boys could learn the value of frontier life, the fledgling Boy Scouts were reluctant to share their name with their female counterpart. James West, Chief Scout in the 1910s, believed that to do so ‘sissified’ scouting and discouraged boys from joining.[2] In 1924, the Boy Scouts even attempted to sue the Girl Scouts for patent violation.

However, the Girl Scouts of the 1910s and 1920s were not entirely radical. Whilst in many ways the Girl Scouts were at the forefront of cultural shifts in gender expectations providing a space where girls could push the boundaries and follow a programme similar to that of their brothers, there were conservative elements to the programme from the beginning.

The early handbooks consistently emphasised the importance of domesticity and motherhood, especially in the 1920s, when they became the focus of the organisation, to the detriment of outdoor activities. Instead of actively encouraging its members to gain an education and pursue careers, as the organisation had done under Juliette Low in the 1910s, the Girl Scouts of the 1920s praised women’s domestic work. This was part of wider efforts to make motherhood and the home ‘fashionable’ again in the face of a large increase in the number of women, including wives, joining the workforce.[3]

Today, the Girl Scouts’ programme encourages girls to push boundaries by introducing them to STEM subjects and encouraging physical activity and entrepreneurship. It might seem easy to trace a direct line between Low’s original Girl Scouts and the organisation today. However the early history of the Girl Scouts highlights the importance of studying an organisation within its historical context. Girl Scouting has always been an organisation which provides its members with a fun environment in which to learn valuable skills, but these skills were often decided by wider trends and circumstances.

[3] The 1927 handbook removed all references to education and college. Girl Scouts Inc., Scouting for Girls (1927 edition).