11. The not so invisible college of Cambridge 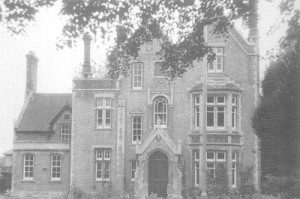 This picture depicts the first permanent home of the ‘invisible college’ of Cambridge. The National Extension College (NEC) was set up in 1963 by Michael Young. He wanted to help adult learners who needed a ‘second chance’, the generation who had had their educations disrupted by the Second World War. He envisaged the NEC as a pilot for a ‘University of the Air’ – what would become the Open University – a novel experiment in distance learning. The limitations of education through formal institutions, the inflexible time constraints, could be overcome.

This invisible college sought to use new methods of distance learning to educate its pupils. One key method was the use of television. Television was becoming increasingly ubiquitous: 70% of British homes had a television in the mid-1960s. TV could be used as a means of educating those across the country without access to formal institutions. Through a collaborative programme with Anglia TV, Young launched an educative series. The initial six programmes were half an hour long, the first half was dedicated to English, and the latter to maths. They reached an audience of 250,000.

This invisible college, however, needed a bureaucratic base. So, after four moves in almost as many years, the NEC moved from a small room in a condemned house in the back streets of Cambridge to Brooklands Avenue. That is the building depicted here. Ironically, it marks the physical space of a provider of education that aimed to overcome the constraints of education in physical institutions.

Tags: advent calendar, Cambridge, distance learning
From: Advent Calendar 2018, Doing history in public
← 10. A Ticket for the Gift of the King’s Cure
Treason law in England from 1351 to the present →
No comments yet