Teaching Around Trauma: The Holocaust in Primary School Education 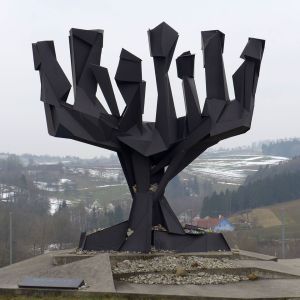 It’s a sunny day in rural England. A football team is practising on the field outside, a group of schoolchildren are queuing for lunch, and I am working as a teaching assistant as a class of nine-year-olds learn about the Holocaust for the first time.

The room is quiet, and I can’t help feeling tense. The teaching of painful histories always carries emotional baggage, forcing educators to balance the need for factual accuracy with the risk of causing lasting trauma. This is particularly true for young children:  their emotional capacities are still developing and many can struggle to separate themselves from traumatic events while others will fail to engage empathetically at all.[1] At the same time, however, the schoolroom has been depicted as a formative space where educators can introduce complex topics in a mediated and emotionally appropriate manner.[2] When schools refuse to teach ‘difficult’ histories, they run the risk of exposing pupils to misinformation from less secure sources. For a topic as emotive as the Holocaust, this can have particularly dangerous consequences.

In my first lesson as a teaching assistant, the class learns about discrimination and anti-Jewish laws in Germany. Their initial questions are surprisingly practical – how did the Germans know who was Jewish? Why couldn’t Jewish people take off their yellow stars? As their teacher points out, these questions are typical for pupils their age, reflecting a growing curiosity and understanding of social structures. When they do manage to empathise with Jewish families, it is typically by framing their experiences within the language of the playground – Nazis become ‘bullies’ and Hitler is accused of ‘not being fair’. This is misleading to some: troublingly, one boy suggests that Hitler might have been literally bullied by Jewish people and ‘wanted revenge’. For most, though, it is also a powerful way in to examining the lives of the Holocaust’s victims.

The mood changes when they learn about Anne Frank. They immediately empathise with the life of a fellow child – how it would feel to be taken away from their school and their friends, to be forced to hide in silence and to worry that your family would be taken away. They are fascinated by the secret entrance to the Franks’ annexe and memorise details of the family’s life. Many write diary entries from Anne’s perspective as part of a writing prompt. Two girls even create a short play, set in 1970, in which an interviewer asks Otto Frank about his life. Quiet and respectful, the play mixes practical questions about the annexe with descriptions of Otto’s love for his family and his emotional response to discrimination.

The hardest part comes at the end of the topic, as the conversation moves to the concentration camps. Death camps are covered directly, but in minimal detail. They learn about unhealthy conditions but not malnutrition, about work, but not slave labour and about deaths, but not the gas chambers. The class is quiet and respectful. However, they clearly fail to engage with the camps in the same way as other elements of the topic. After the topic ends, I interview some of the class about their responses. They choose to tell me about the war, about Hitler, about anti-Jewish laws and the Frank family. While many can answer questions on the topic, however, it is interesting that no-one mentions the concentration camps without prompting.

A few weeks later, I’m told about a second play. With a much larger cast, this performance retells the Frank story with melodramatic flair, long speeches and elaborate death scenes. When the class starts giggling along with the actors, a teacher is forced to call the play to an early close. In some ways, the news is disheartening – the class is clearly a long way from dealing with the full emotional weight of this subject. However, by framing history through their own interests and capacity for empathy, they have managed to engage with a complex topic without subjecting themselves to its most traumatic elements. They may not be ready to fully engage with historical trauma. When they are, however, they’ll already have much of the information they need.